Danai Gurira
Okoye is a member of the Border Tribe and the leader of the Dora Milaje.

Okoye worked with the Avengers to observe and protect the world during the five years after the Decimation.

After the Decimation was reversed, Okoye joined the armies of Wakanda in coming to the Avengers aid during the final battle. When Carol Danvers attempted to get the Gauntlet carrying the Infinity Stones to the quantum tunnel, Okoye led the effort to protect her, killing Corvus Glaive with her spear in the process.

After the battle, Okoye joined T'Challa and Shuri in watching the Wakandan celebration and attended Tony Stark's funeral. 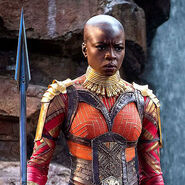