Alexandra Shipp
Halle Berry
Ororo Munroe, also known as Storm, is a class 4 mutant who can generate and manipulate the weather. Originally just an orphaned pick pocket in Cairo, Egypt, she was discovered by En Sabah Nur in 1983, her powers were enhanced and she became one of his followers, however, she turned against En Sabah Nur and helped defeat him. She then joined the X-Men, under the tutelage of Mystique and Hank McCoy.

Growing up as a pickpocket in Cairo, Ororo began to idolize Mystique, following the mutant's heroism in Washington D.C.

One day, while using her abilities to score a wallet, Ororo was chased down by the man she had robbed before getting surrounded by many individuals. Just as things were about to get heated, Apocalypse arrived and killed the men. Thankful for being saved, Ororo brought the being to her home, where he learned of what had happened in the past few centuries by skimming through a nearby television. Believing that humanity had lost its way, Apocalypse decided to "save" the world and imbued Ororo with great power, causing her hair to turn white in the process. Ororo then accompanied Apocalypse to various locations where he recruited Psylocke, Angel, and Magneto to his cause. The group later abducted Xavier from the X-Mansion.

Later, after seizing control of Cairo, Apocalypse ordered his subordinates to protect him while he attempted to transfer his consciousness into a captive Xavier. As they confronted a group of mutants led by Mystique, Ororo got in a fight with Cyclops. Over the course of the battle, she witnessed Apocalypse's disregard for Angel's death and subsequent brutal assault on Mystique and Quicksilver, causing her to attack her former leader. With the help of Jean Grey, Cyclops, and Magneto, Ororo destroys Apocalypse.

As the X-Mansion is repaired (following it's destruction when Xavier had been captured) Ororo talks to Quicksilver about his father, Magneto. After receiving a new uniform, Storm joined the new team of X-Men in the Danger Room for training.

"Sometimes you want to believe people are something they are not and by the time you realize who they really are... it’s too late. "
―Ororo regarding Jean Grey[src]

In 1992 nearly a decade after helping the X-Men defeat Apocalypse, Storm has become a full fledged member of the X-Men, working with her hero, Mystique. When the Space Shuttle Endeavor is in danger of being caught in a powerful solar flare Ororo and the rest of the X-Men travel into space to rescue the crew. Using her powers Storm freezes the hole in the Shuttle while Cyclops shoots and hole in the engine to slow it down allowing Quicksilver and Nightcrawler to teleport inside and rescue all of the astronauts. However one mentions that they forget their captain and despite Ravens insistence they abort Charles insist they go back for the captain. Claiming Jean can hold the Shuttle together long enough for Kurt to get both them in and the captain to safety. Enacting the plan Kurt does manage to get the captain to safety onboard the X-Jet but is unable to retrieve Jean as the flare (unbeknownst to everyone else the cosmic force known as the Phoenix) hits Jean. Although Jean is able to absorb it saving the team in the process. Miraculously Jean survives and the team return to earth and are congratulated.

Later at night a party is thrown outside the X-Mansion with musician and mutant singer Dazzler present. Scott approaches Ororo and ask if Jean seems okay to her. Ororo assures him that Jean is fine. However soon after Jean suffers a breakdown that results in her indirectly attacking numerous students before passing out. When Charles attempted to find out what was wrong with Jean using Cerebro. Jean manages to oust him from her mind injuring him and then escaping the X-Mansion. Realizing she is going to see her father who she thought dead. The X-Men track Jean to her old of Red Hook, New York. As Charles and Scott try to talk her down Jean again loses control and ends up attacking a squad of policemen. Storm attempts strike down Jean with a lightning bolt but Scott stops her. As Jean easily subdues Nightcrawler and Quicksilver, Raven tries to calm Jean down. Assuring her that they would help her. Jean however loses control again indirectly fatally injures Raven by impaling her on wooden debris.

Returning to the mansion a funeral is held for Raven. Later Ororo tells Scott that Jean murdered Raven While Scott insist it was an accident and that Jean isn’t herself. However Ororo warns Scott that people are not always who you think they are. The next day Charles and Scott discover Hank has gone to Erik for help in killing Jean wanting revenge for Ravens death. Having tracked Raven down to New York City. Charles not wanting to risk losing anyone else insist he and Scott will go alone to save Jean. However Scott tells Ororo that he needs her help and standing by her friends insist she go along and Kurt teleports them to Jeans location.

Intercepting Hank, Erik and Erik’s Brotherhood of Mutants members Selene and Ariki. Charles tries to talk them out of killing Jean but fails and so a fight ensues in which Storm takes on Ariki. When he seems to be overpowering her Charles uses telepathy to briefly stun Ariki allowing Storm to subdue him. Eventually the fight is ended when the Mutant Control Unit arrives and takes all mutants into custody. Outfitting them with Mutant Inhibitor Collars all are put on a train convoy to be taken to a secret detention facility. Charles then reveals that an alien force known as a D'Bari are planning to kill Jean to take the power inside her and plan on using it to eradicate both human and mutants from Earth and to repopulate it with their species.

Convinced to save Jean in Ravens honor Erik, Hank, and The Brotherhood unite with the X-Men when the D'Bari attack. Storm uses her power and brings down lightning taking out numerous D'Bari until the leader Vuk arrives. Having absorbed a fraction of the Phoenix powers she manages to overcome Storm and the others. Fortunately Jean having acquired better control over the Phoenix manages take out the remaining D'Bari and kill Vuk ending the invasion. Although Jean disappears into space presumed dead by everyone else.

Storm was one of the many X-Men to greet Logan after he returned from 1973.

As a teenager, Ororo still posses the same maternal qualities as seen by her helping and caring for the fellow orphans in Egypt. She also idolized Mystique similar to how she idolized Xavier. So much to the point that seeing her hero nearly killed by Apocalypse caused her to betray her former master and see him for the ruthless monster that he was. 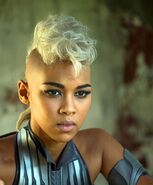 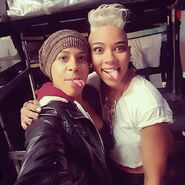