"Powers? What powers? What're you talking about? You see something strange here? Not anything anyone would believe if you told them."
―Peter Maximoff[src]

Peter Maximoff, (born in the 1950s) also known as Quicksilver, is a mutant who possesses superhuman durability, speed, agility, reflexes, stamina and accelerated perception. Following the defeat of En Sabah Nur in 1983, he joined the X-Men under the tutelage of Beast and Mystique.

Peter was born in the mid 1950s to Ms. Maximoff and the powerful mutant Erik Lehnsherr. Growing up Peter knew little about father other than the fact that he could manipulate metal. Due to his mutant powers of enhanced speed Peter found himself constantly getting in trouble. Stealing numerous things.

Logan, Hank, and Xavier traveled to the residence of the teenager, where they find Peter in his basement playing arcade games, noticing the massive amount of stolen items he had amassed. After convincing Maximoff to assist them in breaking Magneto out from the Pentagon, the group traveled to Washington.

Hank acted as a tourist, while Peter, Charles, and Logan travelled to the lower floors. Peter managed to duct tape a security guard to an elevator wall, stealing his uniform. After making it through security, Peter accessed Magneto's cell, where he used vibrations from his hands to shatter the glass ceiling of the cell. As both mutants took the elevator to regroup with Logan and Charles in the building's kitchen, they were quickly cornered by guards, who shot at them.

Quicksilver seized the opportunity to have some fun, darting around the room, disabling and mispositioning the guards and rearranging the fired bullets so that they avoided the other three. After the group escaped the Pentagon, Quicksilver was sent off by Charles, thanked for his contributions by letting him borrow his car, as long as he doesn't go too fast.

Later, Peter watched the news with his younger sister as they broadcast Magneto's speech.

Ten years have passed since Peter helped break Magneto out of The Pentagon, later learning that he is his father. Peter is sitting in his basement watching the news about Magneto reappearing in Poland, when he changes the channel and begins to play Ms. PacMan when his mom comes down to check on him. Peter reassures her that he's fine until she puts the news back on, telling him that she knows that he's going to go after his father and that she can't stop him, but warns that it won't end well. Peter says he's not afraid of him, but his mother says that he should be. Once his mom leaves, Peter looks at the car he took from Xavier ten years back.

He later arrives to the school eating a twinkie and notices an explosion coming from inside the school, caused by Havok's blast. Peter rushes into the school and makes his way down to the basement where he sees the explosion and the X-Men. Able to save both the X-Men and the entire student body from the collapsing mansion, he learns from Hank that Xavier was taken. Scott looks for Havok, his brother's body, among the rubble after asking Peter where he was. He is saddened when he discovers that his brother has died.

William Stryker and his men arrive at the ruins of the school, but before Peter can do anything, he is distracted by Raven's warning. He is then knocked out by a blast along with everyone else.

Peter, along with Hank, Raven and Moira are captured and taken to Stryker's Weapon X facility where they are placed in a cell. Peter wakes up to see Hank in his Beast form and freaks out, asking if that's going to happen to all of them. Beast just tells him that he forgot his meds at home.

After being questioned by Stryker, Peter asks Raven about Magneto and then reveals to her that he's his father. Raven is shocked and Peter tells her that Erik left his mom before he was born and when he found out the truth it was too late. After the group get a message from Professor X, they hear screaming and gun shots coming from the base. Kurt appears outside of the cell and tells the group to move away from the wall. Cyclops breaks the group out of the cell with his optic beams, Peter and the others follow Scott, Jean and Kurt as they lead them to Stryker's War Jet. Jean had freed Weapon X, Stryker's experiment, who had killed all of Stryker's soldiers. She helped to restore some of his memories and he then ran off into the wilderness outside the base. Scott then finds tactical flight suits, which the team put on. Moira pilots the jet to Egypt, where Xavier is being held captive.

The Four Horsemen of Apocalypse; Magneto, Storm, Psylocke, and Angel are there. En Sabah Nur planned on transferring his consciousness into Xavier's body in order to use his telepathy to recruit an army of mutants. He was rescued during the process but lost his hair as it was nearing completion. Kurt teleported him into the jet. Peter used his speed to slow down time and land punches and kicks on En Sabah Nur, but was eventually countered, and had his leg broken and arm dislocated. Before Peter would be killed, Raven saved him by impersonating Psylocke, attacking En Sabah Nur.

After this, Xavier's mansion is rebuilt with the help of Magneto. Xavier also rekindles his relationship with Moira, having restored her memories. Peter, along with Scott, Jean, Kurt, and Storm, are trained as the new X-Men by Raven and Beast.

In 1992 nearly ten years after helping the X-Men defeat Apocalypse, Peter has become a full fledged member of the team which has become nationally celebrated as team of superheroes. On one day when the Space Shuttle Endeavor was at risk of being caught in a solar flare Peter and the rest of the team were sent into space by Professor X to rescue the astronauts. Upon seeing the Shuttle, Mystique had Nightcrawler teleport himself and Quicksilver inside the shuttle. Once inside using his super speed Peter managed to quickly unbuckle and bring all the astronauts to Kurt who teleported everyone to safety. However on the X-Jet one of the astronauts revealed their commander was left behind and

despite Raven‘s insistence they leave Charles demanded they go back for the commander. Peter taped up Kurt’s suit before before Kurt took Jean and himself back inside. While Jean managed to hold the Shuttle together long enough for Kurt to get the commander he was unable to reach Jean in time as the solar flare struck.

Fortunately Jean managed to survive and the team returned to earth with praise. At the X-Mansion Charles congratulated the team and gave everybody the day off. Peter proceeded to brag to the students how he did most of the work.

However, later at night something inside Jean began to affect her mind and powers causing her to lash out at her teammates and leave the X-Mansion. Charles revealed that Jean was going to see her father who she long thought deceased and the team followed her. As Xavier and Scott tried to talk Jean down and convince her to return to the school with them and sqaud of police arrived and Jean attacked them. The team tried to subdue her put Jean proved stronger than any of them. Peter usuing his super speed attempted to reach Jean. However, Jean saw him coming and flung him aside resulting in Peter getting heavily injured and knocked unconscious as he hit the ground at such high speeds. In the end Raven was accidentally killed and Jean escaped.

Returning to the X-Mansion Peter was taken to the infirmary where he remained unconscious for days, until finally reawakening after Jean had disappeared into space, believed dead.

Peter is a kleptomaniac who has a hinted reputation for stealing. It is also assumed that he has ADHD (attention deficit hyperactivity disorder) due to his hyperactive nature. He is very sarcastic and witty, and is described as a "pain in the ass" by Charles Xavier. His personality compliments his power, he's very outgoing and hyper. Peter's wit is notable as he is constantly making jokes for either his own amusement or to comfort his friends and teammates as shown when they all went to battle Apocalypse and Maximoff made fun of himself on how he still lived with his mother even though he was an adult much to the others amusement and lightening the mood before their battle. 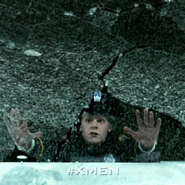 Peter with Logan, Erik and Charles.

Quicksilver with Charles, Logan and Erik.

Pietro and his little sister. 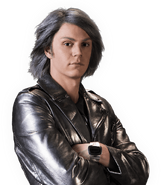 Quicksilver on the cover of Empire. 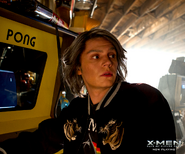 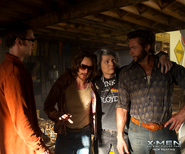 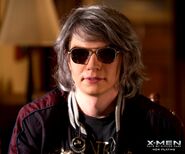 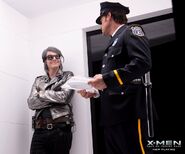 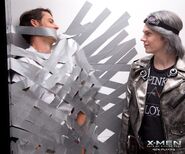 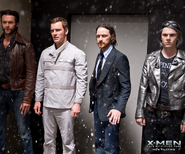 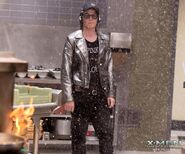