Marvel Movies
Register
Don't have an account?
Sign In
Advertisement
in: Spider-Man: Into the Spider-Verse characters, Geniuses, Students,
and 14 more

Peter Parker (Into the Spider-Verse Ultimate)

"Y'know your shoe's untied? This's a onesie so, I don't really gotta worry about it...huh. I thought I was the only one. You're like me."
"I..I don't wanna be."
"I don't think you got a choice, kiddo. A lot going through your head, I'm sure."
"Y-yeah."
"You're gonna be fine. I can help you. If you stick around, I could show you the ropes."
"Yeah, sure."
"Cool. Just uh, just need to destroy this big machine real quick before the space-time continuum collapses. Don't move."
―Peter Parker meeting Miles Morales[src]

Peter Parker was the first Spider-Man in Miles Morales' dimension, but was tragically killed in battle against the Kingpin.

"Alright, let's do this one last time. My name is Peter Parker. I was bitten by a radioactive spider, and for 10 years, I've been the one and only...Spider-Man. I'm pretty sure you know the rest: I saved a bunch of people, fell in love, saved the city, and then I saved the city again, and again, and again, and again. And I did uh, I did this. We don't really talk about this. Look, I'm a comic book, I'm a cereal,did a Christmas album, I have an excellent theme song, and a so-so Popsicle. I mean, I've looked worse. But after everything, I still LOVE being Spider-Man. I mean who wouldn't? So no matter how many hits I take, I always find a way to come back. Because the only thing standing between this city and Oblivion, is me. There's only one Spider-Man. And you're looking at him."
―Peter Parker[src]

Bitten by a radioactive spider at age 16, Peter Parker became the costumed superhero Spider-Man following the death of his Uncle Ben. Operating as Spider-Man for 10 years (with assistance from his Aunt May) Peter met and married Mary Jane Watson. He also came into conflict with numerous villains such as Prowler, Doctor Octopus, Scorpion, Tombstone, Green Goblin and crime boss Wilson Fisk, aka Kingpin.

However, things would change when Kingpin eventually had a machine called the Super-Collider commissioned from the scientific corporation Alchemax, designed and constructed by Dr. Olivia Octavius, intending to open a portal to another dimension to find counterparts of his deceased wife and son. However, Spider-Man found out about this and attempted to stop his plans. He engaged his nemesis Norman Osborn, aka the Green Goblin somewhere in the bunker the Collider was located. Attempting to reason with the Goblin about the danger the Collider posed, he discovered and rescued a young boy named Miles Morales, who had stumbled upon the battle, and discovered Miles had similar powers through their shared spider-sense. He instructed Miles to keep out of harm's way, and even offered to teach him about his powers, but was ambushed by the Prowler, whom he fought across the Collider's chamber.

Eventually, the Goblin attacked again as the Collider activated and created a dimensional rift. Goblin attempted to kill Spider-Man by placing him in the colliding energy beams, and through his unique dimensional signature, ended up causing a powerful dimensional disruption. The resulting explosion heavily damaged the Collider, killing Osborn under its wreckage and badly injuring Spider-Man. Miles found Peter's wounded form, to which the dying hero gave him a flash drive with software to disable and destroy the Collider, instructing Miles to do so and keep safe from the Kingpin, falsely assuring the boy he'd be safe.

He is confronted by Fisk, and weakly banters with him, but also attempts to reason with his nemesis, telling him that trying to bring back Vanessa and Richard was not worth potentially destroying New York. Unfortunately, the mention of them enrages Kingpin into dealing a fatal blow to Peter, murdering him. He orders Prowler to dispose of the hero's body, and upon spotting an obscured Miles, also orders his death. Peter's death is later discovered and is reported throughout New York, shocking the citizens with their beloved hero's tragic demise. A speech is later held by his distraught wife Mary Jane, who states that Peter humbly believed anyone could be Spider-Man, merely saying he was just the boy who was bitten by the spider.

Immensely guilty and bound by his promise to destroy the Collider and stop Fisk's scheme, Miles purchased a cheap Spider-Man Halloween costume in an effort to carry on Peter's place as Spider-Man.

It also turns his being placed in the beam, ended up drawing in inter-dimensional counterparts of him into his universe: namely two older versions of himself, alongside Peni Parker, Gwen Stacy and Peter Porker. All his counterparts saw his funeral and were shocked to discover his fate. While working with him, Miles refused to let Peter B. Parker meet the same fate as a his counterpart, something that left the older Peter touched. Miles later avenged Peter's death and completed his mission by taking down Kingpin. After the villain was defeated, Miles took up the role of this dimension's Spider-Man as the other counterparts returned to their own.

Peter was a brave, selfless and friendly young man with a powerful sense of justice and responsibility to helping others, and due to his heroics and protecting the people of New York, was renowned as the champion hero of the city, adored and respected by all.

Despite being injured and knocked down constantly, Peter declared that he loved helping people as Spider-Man, as mentioned by his Aunt May, he believed he was the only person who could protect the city from villains. Upon meeting Miles, he was astonished to.

According to his wife at his funeral, Peter was also very humbled and once told Mary Jane that anyone could be Spider-Man if they tried to be. 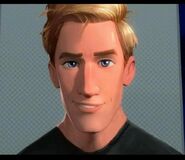 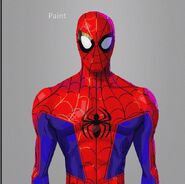 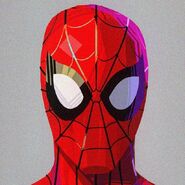