Donald MacKinnon
Daniel Cudmore
Peter Rasputin, also known as Colossus, was a class 3 mutant who possessed the powers of metal mimicry, superhuman strength and durability. He was a former student of Xavier's School for Gifted Youngsters, member of the X-Men and a member of the Free Mutants.

During the final days of the Sentinel Wars; Peter was killed by two Sentinels Mark X.

Peter Rasputin was born in 1986 during the Chernobyl disaster in Soviet-era Russia which caused a number of mutant infants to manifest their abilities at such an early age. He later immigrated to the United States and enrolled in Xavier's School for Gifted Youngsters.

Colossus was a student at Xavier's School for Gifted Youngsters, he was sketching in the courtyard.

When the X-Mansion was being attacked by Stryker's soldiers, Colossus used his metal body to stop the soldiers and attacked two of them, punching them through a wall and rescuing Siryn. He found Wolverine and said that he could help him but Wolverine told him to help the kids that were running away from the X-Mansion. So, Colossus led them out of the mansion to the forest using a secret passage.

After the events of Alkali Lake, Colossus returned to the Institute along with all the other students.

Colossus was in the Danger Room with the other students under Wolverine's teaching. The simulation is a fight with a Sentinel and Colossus is fighting to the side of Rogue. When the Sentinel attacks them, Rogue absorbs his powers and covers them both from the attack with her (temporal) steel body. When Wolverine has enough of the training, he calls him, referring at him as "Tin Man", and makes him throw him to the giant robot, decapitating it and so ending the simulation.

As an X-Men recruit and student, Colossus assisted at Xavier's funeral. After the ceremony, when Wolverine had come back from Magneto's base, he, along with Iceman and Kitty Pryde, joined his teachers in the fight at Alcatraz Island. During the battle, his power proved to be quite useful, since he was able to defeat every single opponent he faced. Eventually, he threw Wolverine at Magneto, making a distraction and permitting Beast to inject him with the cure.

After the battle, Colossus came back to the school with all the other students, the Institute run now by Storm.

Colossus, Iceman and Kitty Pryde met up with fellow survivors Bishop, Warpath, Blink and Sunspot. They formed a way to survive; Warpath detected a Sentinel group and alerted Kitty and Bishop. While the group fought off the Sentinels, Kitty sent Bishop's consciousness back a few days ago to warn them of the attack. This went on for a while as they travelled the world. During the opening battle Colossus managed to beat down one of the Sentinels and attacked another, only for his punch to be caught by the Sentinel and had his arm ripped off and then was killed by a curb stomp but the death was erased thanks to Kitty and Bishop.

They eventually met their old teachers Storm, Professor X, Magneto and Logan in China, where they decided to send Logan's consciousness back in time to change the past. Colossus waited outside with the other X-Men to wait for the Sentinels to come.

Warpath sensed twelve Sentinel ships approaching and the X-Men prepared to fight. Storm and Magneto took out most of the Sentinels, but some survived and began to fight viciously against the X-Men. Colossus, in his metal form, attempted to fight a Sentinel, but was overpowered by another and ripped in half by two Sentinels.

Despite Peter's fearful appearance and his hulking powers, he was a kind and gentle individual, always disposed to help the younger students of the Institute and ready to put his strength at the service of whoever needs it. He was also serious when it came to being a member of the X-Men.

Despite Peter's serious demeanour, he was proven to have a sarcastic sense of humor; as demonstrated when Flea laughed at a picture that he sketched of Bobby Drake and Marie D'Ancanto kissing. 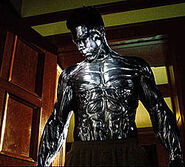 Colossus prepares to throw Stryker's forces through a wall.

Peter leading the students during the evacuation.

Colossus in the Danger Room with Wolverine.

Colossus and Wolverine prepare a fastball special to take down a sentinel.

Peter in the Danger Room.

Peter in the Danger Room. 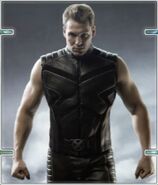 Behind the scenes image of Daniel Cudmore having metal prosthetics applied.

Behind the Scenes image of Daniel Cudmore having metal prosthetics applied. 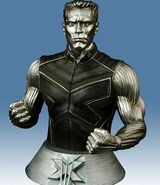 Colossus on the cover of Empire. 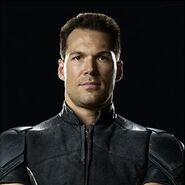 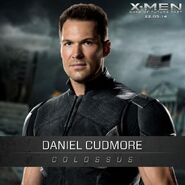