December 5, 2008
Punisher: War Zone is a 2008 action film based on the comic book vigilante and anti-hero The Punisher, a character whose adventures are published by Marvel Comics. The film is not a sequel, and has no relation to 2004's The Punisher, directed by Jonathan Hensleigh puts Frank Castle against the criminal Billy Russoti who becomes Jigsaw after Castle disfigured his face.[1] The film was released on December 5, 2008. The budget of the film had a $35 million budget and it grossed $10,089,373 worldwide with DVD sales with $25,650,000 coming from North America and another $9,900,000 overseas.

Infamous vigilante and anti-hero Frank Castle is six years into his vengeance-driven zeal as the Punisher. When he brutally assaults a "beat the rap" party for notorious mob boss Gaitano Cesare, he is alerted to the fact that Billy Russoti has escaped to his recycling plant hideout by Detective Saffiotti who along with Detective Martin Soap were staking out the party. Castle infiltrates Russoti's hideout and murders Nicky Donatelli as he is exiting the bathroom. The ensuing gunshot alerts Russoti, and a brief fire fight between Castle and he ensues, ending in Russoti being thrown into a glass-crushing machine which ends up leaving the gangster hideously disfigured. Castle, who has taken cover behind the body of Donatelli, realizes that the man he killed was an undercover FBI Agent.

Agent Paul Budiansky, the ex-partner of the undercover agent, joins the NYPD's "Punisher Task Force" and partners up with Soap to help bring Castle to justice, once and for all. Meanwhile, a facially mutilated Russoti recovers from his run-in with the Punisher with revenge on his mind and frees his deranged brother, Loony Bin Jim under his new alias "Jigsaw."

Distraught that he has now become the very evil he swore to battle, Castle attempts to make reparations to Donatelli's wife, Angelaand daughter, Grace to no avail. Castle considers retiring from the vigilante business. However, upon hearing information from his partner and armorer, Microchip, plans quickly change once he learns that Jigsaw has learned of Donnatelli's family's existence, and will be going after them for revenge.

Jigsaw, Loony Bin Jim, Ink, and Pittsy break into Donatelli's house and hold the family hostage while they tear the house apart looking for the money Donatelli was in charge of. Meanwhile the Punisher goes after the 3 criminals led by Maginty, who were hired to run the delivery for Jigsaw's "biological goods". While doing an acrobatic roll through the air, one is shot by a grenade launcher, another is shot by a rifle, and Maginty has his knees shot out and interrogated by the Punisher as to Jigsaw's whereabouts. Maginty informs Jigsaw went after Donatelli's money so he could pay them for the job. Begging for his life, the Punisher doesn't shoot him, but instead throws him off the roof and onto a spiked fence, killing him.

Budiansky enters the house, refusing the Punisher's help, and is forced to drop his weapon by the sight Ink and Pittsy holding the family hostage. Soap frees the Punisher, who kills Ink, and Budiansky disarms Pittsy and is about to handcuff him when the Punisher shoots Pittsy in the face with a shotgun, blowing apart the handcuffs in Budiansky's hand in the process. Budiansky can only draw his weapon and point it at the Punisher in protest to no avail. Budiansky then arrests Jigsaw and Loony Bin Jim after a short gun fight in which the 2 criminals simply empty their clips at Budiansky who was behind cover and still had ammunition left.

Jigsaw and his brother escapes custody by giving up Cristu Bulat, who was smuggling in a biological weapon to Arab terrorists in Queens to the FBI, in exchange for total immunity, the money Donatelli hid and a file on Microchip. They take Microchip hostage, killing his mother in the process and hiring a small private army of criminals, and then holed up in the Bradstreet Hotel.

Castle enlists the help of Agent Budiansky, who sets up a distraction for him at the Bradstreet Hotel by offering up Jigsaw to Tiberiu Bulat, Cristu's father who sends in his goons to start a shootout in the hotel's lobby. Before entering, Castle knocks Budiansky out, knowing that he must face Jigsaw alone. Once inside, a brutal shootout ensues with Jigsaw's goons. Castle confronts Jigsaw and his insane brother, both holding Microchip and the Donatelli family at gunpoint. Jigsaw gives Castle a choice: If Frank shoots one of his friends, Jigsaw will let the others go free. Microchip boldly offers his life to save the Donatellis, but Castle chooses to shoot Loony Bin Jim instead. As a result, Jigsaw kills Microchip. Enraged by the loss of his partner, Castle attacks Jigsaw, ultimately ending with the Punisher impaling Jigsaw with a metal rod and then throwing him onto a fire. As Jigsaw burns to death, Castle calmly tells him that "This is just the beginning."

Outside the building, Castle bids farewell to the Donatelli family. As they are walking down the street, Soap tries to persuade Frank to give up his role as the Punisher. Soap has a change of heart, however, when he is attacked by a mugger, who quickly becomes another victim of the Punisher.

The film was shot in Québec, Canada and Vancouver, British Columbia, Canada. 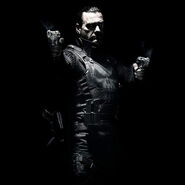 Video:Punisher War Zone trailer
Add a photo to this gallery

Retrieved from "https://marvel-movies.fandom.com/wiki/Punisher:_War_Zone?oldid=235631"
Community content is available under CC-BY-SA unless otherwise noted.