"Forget everything you think you know. Whatever lessons you took in school, whatever your parents taught you. None of that matters today. You're not kids anymore. You're not students. You're X-Men!"
―Mystique[src]

Raven Darkholme, also known as Mystique, was a mutant who possessed the ability of shapeshifting, superhuman strength, speed, agility, an accelerated healing factor and longevity. She was also a member of the X-Men and a former member the Brotherhood of Mutants.

In 1992, Raven was accidentally killed by one of her students, Jean Grey; who was possessed by the Phoenix Force and not in control of her actions at the time.

Raven shared the history of her counterpart up until 1973.

Raven's attempt on Trask's life was thwarted when the consciousness of Wolverine was sent back to 1973 to alter past events. She was stopped by Xavier and Lehnsherr, who learned about the consequences of Trask's death through Wolverine. However, new problems arose when Lehnsherr attempted to kill Raven to ensure the future would be changed. Raven escaped, but took a bullet to the leg, and her blood was obtained by Trask's scientists.

Raven continued to pursue Trask and traveled to Washington, D.C. where he would be unveiling the Sentinels to the public. Xavier again tried to stop her from assassinating Trask, but Lehnsherr caused further conflict by taking control of the Sentinels. The ensuing chaos allowed Raven, who was disguised as a Secret Service agent, to sneak into an underground bunker with Trask and President Nixon. Though Trask's mutant detecting device gave her away, Trask stopped the guards from killing her because he needed Raven's DNA for the Sentinels.

The metal bunker was soon brought above ground by Magneto, who now sought to murder President Nixon and the rest of the men in the bunker on national television. He would be thwarted by none other than Raven, who non-fatally shot him in the neck and knocked him out. As Raven turned her gun on Trask, Xavier was finally able to convince her to let him live; the public had just witnessed a mutant prevent an assassination attempt and sparing Trask's life would prove not all mutants were dangerous. Raven dropped the gun, effectively saving the mutants from extinction. She then disguised herself as a soldier and escaped.

"Y'know, I really used to believe that. And maybe it's true here in Westchester, but they still hate and fear us, Charles. The difference is their just more polite about it now."
―Mystique[src]

Despite apparently rescuing him, the real Stryker still obtained Wolverine, although it's unknown whether or not Raven turned him over willingly.

In 1983, Raven investigates an underground fight club in East Berlin, discovering Kurt Wagner and Angel. She uses the services of the black marketeer, Caliban, to rescue Kurt and bring him to America. From Caliban she also learns that Erik has resurfaced and had lost his wife and child. She then takes Kurt to Xavier's Mansion and he is recruited as an X-Man.

At the Mansion, Raven reunites with Hank and he shows her the new Blackbird and tells her that he has plans to reform the X-Men believing that the world still needs them. Raven however then tells him she is here to talk about Erik much to Hank's dismay.

When Charles returns to the Mansion along with Alex and Moira (who does not recognize Raven due to Charles erasing her memories in Cuba) the two discuss humanities treatment of Mutants with Charles believing that they have made significant progress only for Raven to claim that Mutants are still hated and living in fear and claims Charles should teach his students how to fight and defend themselves. When Charles claims she still sounds like Erik, Raven reveals to him what happened to Erik’s family and ask Charles to use Cerebro to find him.

Using Cerebro, Charles locates Erik, however, he is soon taken over by Apocalypse who uses Charles powers augmented by Cerebro to disarm the worlds Nuclear arms. Charles in a desperate attempt to stop Apocalypse orders, Alex, to destroy Cerebro which he does knocking Charles out in the process. As Raven, Moira, Hank, and Alex take the unconscious Charles out of the room, Apocalypse along with his Four Horsemen including Erik kidnap Xavier.

When Xavier's Mansion is destroyed by Havok's blast (which was meant to hit En Sabah Nur when he kidnapped Xavier) Peter arrives and is able to save everyone except for Havok, who had perished in the explosion. Raven is then captured by Stryker's men along with Moira, Peter, and Hank, after being knocked out with a blast. They are interrogated in a cell by Stryker. After the interrogation, Raven learns from Peter that Magneto is his father. Scott, Jean, and Kurt free them after Weapon X kills all of Stryker's soldiers. They escape from the base after Weapon X runs off into the wilderness, his memory partially restored thanks to Jean. Moira pilots Stryker's Jet and the group heads or Cairo, Egypt to save Xavier.

On the way, a frightened Jean ask Raven if she was scared on that day in 1973 in Washington D.C when she stopped Erik. Mystique says no but then begins to tell them she was scared on her first mission in 1962 and recounts the formation of the X-Men that day. Arriving in Cairo, Mystique instructs the others to save Charles while she and Quicksilver stop Magneto from manipulating the Earth's magnetic poles and killing billions of people. Before splitting up Cyclops advises Raven that not all of them can control their powers but Raven tells them not to and instead embrace them and for the first time in ten years willingly sheds her human form.

Arriving at Erik's location, Raven and Peter try to reason with Magneto to stop and explains to Erik that while he might have lost his wife and child he still has her and Charles (and subtly hints that Peter is also his child). En Sabah Nur attempted to transfer his essence into Xavier to gain his telepathy, but Kurt saves Xavier, before it happens. Xavier, however, losses all of his hair as a result from the transfer ritual, but for the most part is unharmed. When En Sabah Nur tried to kill Peter, whom he had crippled, Raven disguised as Psylocke slashes his throat with a katana however he quickly heals. Apocalypse then begins to strangle Mystique, but Xavier uses his telepathy to stop him from killing her. Scott and Magneto fight En Sabah Nur physically while Xavier mentally fought him in the midst of it all Hank manages to get Raven and Peter to safety. While they are unable to overcome Apocalypse this distracted him enough for Jean to unleash her full power and with the assistance of Storm as well (who idolized Mystique) Jean incinerates him! with Angel incapacitated during the battle whilst Storm and Magneto having turned on En Sabah Nur, Psylocke fled.

After the battle with En Sabah Nur, Raven and Hank train Scott, Jean, Kurt, Peter and Storm as the next generation of the X-Men.

"I'm not afraid of you, Jean. Look at me. Focus on my voice, we’re going to get through this together"
―Raven trying to calm Jean[src]

Over the next nine years since the defeat of Apocalypse, Raven became the field leader of the X-Men. She had led the team on numerous successful missions, with the X-Men gaining positive world wide recognition as a result. On a mission into space to rescue astronauts of the Endeavor, Raven says the team should retreat as they will not escape the solar flare in time. However, Xavier refuses to leave the last astronaut behind and instructs Jean to make a shield.

With Kurt going with her, Jean manages to hold the shield long enough for Nightcrawler to get the last astronaut to safety. Jean Grey is hit by the solar flare. Nearly dying, the stress on Jean's body unleashes the Phoenix Force, which absorbs the solar flare. Despite this success, Raven later chastises Charles for risking Jean and the rest of the team's lives, noting that his inflated ego comes from the X-Men's success. Charles tells Raven it's necessary if they are to keep the humans in good faith that mutants can co-exist with them. Later, while the rest of the team are at a party featuring Dazzler, Raven tells Hank that they should move on from the X-Men.

During this time, Jean has a mental breakdown that nearly injures many of the students and passes out. Raven and Hank accompany Charles as he used Cerebro to find out what was going on in Jean's mind. As Charles probed her mind, Raven discovered that Charles had placed mental blocks on her before Jean managed to remove Charles from her mind, which severely injures him. Jean then escapes and the team go after her, with Xavier knowing that Jean is going to her old home. On the flight there with the X-Jet, Raven ask Charles how he knows where Jean is going and what he did to her. Charles tells Raven that he did what he needed to do to protect her. Raven accuses Charles of hiding the truth from Jean. The X-Men attempt to bring Jean back to them, but interruption by local police causes a battle. Raven approaches Jean and tries to calm her, assuring Jean that she will not give up on her. Jean, unable to control the Phoenix, accidentally blasts Raven away, impaling her on a piece of wood. As Hank goes to her aid, Raven tries to tell him that she loves him, with her last breath before passing away. The X-Men bury Raven at school and held a funeral where Charles told them that Raven lives on through all of them.

However, a change in history lead to Raven reuniting with Charles and Hank and turning against Erik's attempt to start a war, this event narrowly saved her from killing Bolivar Trask in revenge and becoming a murderer. Instead, being able to conquer her hatred resulted in her becoming the compassionate person she used to be, and escaping her destiny of becoming a mutant terrorist and villain.

No longer a villain and now hailed as a mutant hero for stopping Erik's declaration of war at the White House, Raven focuses all of her efforts in freeing and saving as many of her fellow mutants as she can. Eventually, she returns to Charles' side to help Erik also reform and find peace. After they successfully helped Erik, Raven remains with her foster brother and becomes the teacher of the next generation of X-Men, some of whom the very same X-Men who became her enemies in a timeline that no longer matters.

Raven is an expert in espionage and hand to hand combat. She is also extremely flexible, able to move her handcuffed arms from behind her to her front, and unlock clamps on her hands with her feet. 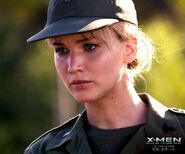 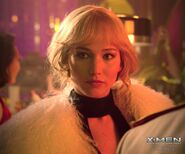 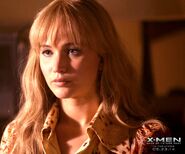 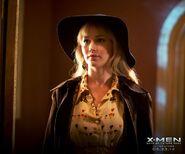 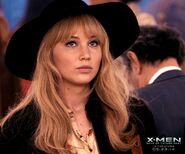 Mystique on the cover of Empire.

Jennifer Lawrence on set as Mystique. 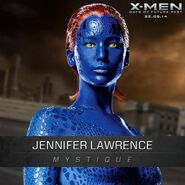 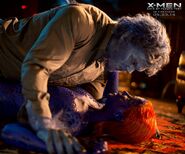