Riz Ahmed
Riot was the name of a gray alien symbiote from the planet Klyntar. Its host was Carlton Drake.

The Riot Symbiote was one of four symbiotes recovered from a comet by a spaceship operated by the Life Foundation. The ship crashed in Malaysia upon reentry to Earth, and the Riot Symbiote escaped into the population, first bonding with the surviving astronaut, John Jameson, then jumping from host to host while traveling to San Francisco. The Riot Symbiote eventually bonded with Life Foundation CEO Carlton Drake with the goal of bringing more Symbiotes to Earth to bond with humans and then take over the planet. Riot and Drake were defeated by Eddie Brock and Venom.

Riot was a sadistic, cannibalistic, almost borderline sociopathic entity who's only concern was keeping itself and its host alive. At first he wanted Venom to join him since he was looking for him and gave him a chance to be on the ship but was displeased of Venom's treachery.

As a Symbiote, Riot was able to bond with virtually any life-form, can emulate its host and even enhance their abilities. The symbiote doesn't need to mate either and can reproduce asexually. 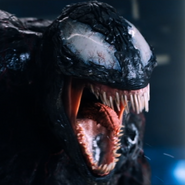 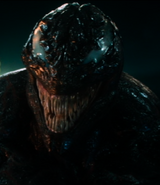