Michael Massee
Fred Tatasciore
Robert Bruce Banner is a renowned scientist who specialises in the field of gamma radiation and the head of S.H.I.E.L.D.'s super soldier program.

Bruce is able to transform into the Hulk; whenever he is stressed or enraged; due to the fact that he was exposed to gamma radiation that genetically modified his DNA.

Bruce is obsessed with finding the secret to Captain America's strength to use it as a way to gain control of the Hulk and use him as a benefit for mankind, he is the ex-boyfriend of Betty Ross, who he still feels passionate about, in the past he destroyed a large part of New York and killed civilians. He takes medications to suppress his rage, but he gets stressed with Nick Fury frequently because these meds slow his work down.

Bruce is overjoyed when Captain America is thawed from ice and studies his blood closely, when the Chitauri attack the Triskellion, he mixes his gamma-mutated DNA with Captain America's super soldier serum, creating a bigger, stronger, grey-skinned Hulk which briefly has Banner's mind, when the battle intensifies, Hulk slaughters dozens of the aliens an turns on the Avengers, his new-found strength even allows him to lift Thor's hammer with difficulty, despite the worthiness test. He is injected with a sedative and calmed down by Betty Ross, and then is sentenced to spend the remainder of his life in a cell built for Hulk.

Bruce spends most of the sequel confined in his glass cell, where he is constantly given deadly doses of a sedative and forced to watch security footage of Hulk at the attack on the Triskellion, when the aliens invade Earth, he eventually realizes that the Chitauri were so easily defeated because Hulk gives off a gamma signature, which makes vibranium brittle and fall apart, before he can help the Avengers, he is poisoned by the Chitauri and seemingly dies. Later, he transforms into Hulk and wakes up to attack the Chitauri forces in New York. Hulk is last seen looking at Betty one last time before moving on.

Hulk is constantly enraged and draws his strength from this rage. The angrier Hulk is the more powerful he becomes. This aspect of his physiology grants him virtually limitless strength. If Hulk calms down to a certain point, he will revert back to the form of Bruce Banner. 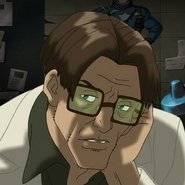 Bruce in his human form. 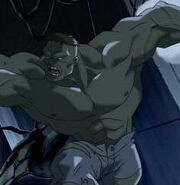 Hulk in he appears in Ultimate Avengers.