Robert "Bobby" Drake, also known as Iceman, was a class 5 mutant who could generate and manipulate ice. He was also a former student of Xavier's School for Gifted Youngsters, a former member of the X-Men and a member of the Free Mutants.

During the final days of the Sentinel Wars; Bobby was killed by a Sentinel Mark X.

Robert Louis Drake was born in Boston, Massachusetts, to William and Madeline Drake. When Bobby first discovered his mutant powers, he hid it from his parents and his brother. He convinced his parents to enroll him in Xavier's school, telling them it was a prep school.

Bobby is one of the first students to reach out to Rogue and begins a romantic relationship with her. Later when Rouge accidentally used her powers on Logan, Mystique disguised as Bobby told her the Professor was furious at her and told her to leave. After Rouge is rescued by the X-Men she Bobby, and John are seen happily playing foosball.

Bobby, Rouge, and John are on a field trip. While they are sitting around John teases some boys who want to use his lighter to smoke. When one of the, forcefully takes it John makes the flame grow wider which ignites the boys upper body. Bobby uses his powers to put the boy out. Xavier then mentally freezes everyone except the students and reprimands John. They then all leave. At the school, Bobby and Rogue discuss being more intimate, but Rogue doesn't want to risk harming him due to her powers. Rogue then sees Logan and runs to hug him. Bobby introduces himself as Rogue's girlfriend and freezes Logan's hand as they handshake.

Later that night, Xavier, Cyclops, Jean, and Storm are out with Logan looking after the kids. He and Bobby converse in the kitchen. The school is then raided by William Stryker and soldiers. Logan manages to escape with Rogue, Bobby, and John beside him. Bobby suggest they stay at his parents house. Arriving at the Drake's residence, Bobby gives Rogue some clothes and his mom's gloves. The two kiss with Bobby briefly able to resist Rogues powers by using his Ice powers. However eventually Rogue powers overcome his and they breakaway before Bobby is killed. Bobby’s parents and brother arrive and Bobby "comes out" to them as a mutant. As he shows his parents his powers Bobby's brother Ronny is jealous and scared of his brothers powers and calls the police on him and the others. As the police arrive Logan tries to defuse the situation only to be shot in the head. John then used his powers to attack the police. However, Before he can kill them, Rogue uses her powers to stop him and put the fire out. Jean and Storm along with Nightcrawler arrive in the X-Jet to pick them up. As Bobby leaves, he takes one more look at his family saddened knowing they will no longer accept him now. As they take off, they are pursued by two Air Force F-16 fighter jets. While Jean and Storm are able to take out the jets they are hit by one of the misses and the X-Jet nearly crashes only for them to be saved by Magneto. That night the remaining X-Men realize thanks to Magneto that Stryker's plan is to use Charles and Cerebro to wipe out all Mutants on the planet and decide to team up with him and Mystique to stop him.

Arriving at Alkali Lake, Bobby, Rouge, and John are told to stay on the Jet. While they wait John grows impatient and decides to follow after them. When Xavier begins using his powers in Cerebro; Bobby and Rogue are painfully effected and thinking they are about to die hold hands. Fortunately, Charles is stopped and Styker's plan fails. Bobby and Rogue then decide to fly the Jet closer so that the others can safely get on which they succeed in. As everyone but John returns to the plane (John having joined Magneto) they prepare to leave as the dam begins to break. They are unable to take off however and Jean using her powers sacrifices herself by holding back the flood of water and lifting the Jet with her powers to safety and out of harms way.

Bobby and Rogue Later accompany Xavier and the rest of the X-Men to the White House where Xavier reveals to the president that Stryker arranged his assassination and that Humans and Mutants should work to coexist or they will end up destroying each other.

Bobby is now part of the X-Men, a full fledged member of the group, and is seen in the Danger Room with the rest of the X-Men. With one of the Sentinels coming for him and Kitty Pryde with the Sentinel firing a rocket and with his powers even stronger Bobby stopped the rocket from hitting them and with another one about to hit when Bobby had his back turned, Kitty grabbed him and phased the rocket the rocket through them. Rogue appearing in the distant saw them and assumed that they were hugging. Bobby's relationship with Rogue also appears to be deteriorating, strained by their inability to have physical contact and by his close friendship with Kitty Pryde. Seeing them both almost "kiss" prompts Rogue to seek out "the cure" so she can finally touch Bobby without fear of hurting him. Bobby goes to try and stop her and is confronted by John (now going by the name of Pyro) When John proceeds to insult Rogue he prepares to fight but back down as to not cause a scene in public. John then however proceeds to set fire to the place giving out the cure. When Wolverine prepares to take the X-Men to stop Magneto from killing the source of the cure (a young boy named Leech) Bobby reminds them that theirs only six of them now. Logan agrees but points that they have lost both Scott, and Professor X and that if they don’t do something everything they fought and stood for will die with them out and that he will not let that happen. Bobby agrees and he Kitty, Colossus, and Storm head out to Alcatraz to stop Magneto. Bobby takes part in the X-Men's final confrontation with Magneto's army and shows his true power by fighting Pyro one-on-one. During this battle, Iceman's ability to transform his body into ice is finally shown, allowing him to defeat Pyro. After the battle, he finds Rogue in her room, having taken the cure, but the two decide to continue their relationship.

"They'll find us, they always do"
―Iceman[src]

In the year 2023 Bobby, Kitty Pryde and Colossus meet up with fellow survivors Bishop, Warpath, Blink and Sunspot. They form a way to survive; Warpath detects a Sentinel and alerts Kitty and Bishop. While they fight off the Sentinels as long as they can, Kitty sends Bishop back a few days ago to warn them of the attack. During the opening battle Bobby freezes one Sentinel solid that was chasing Kitty and Bishop, but during the battle the Sentinel breaks free and grabs Bobby around the neck, before decapitating him. However the death was erased thanks to Kitty and Bishop. This goes on for a while as they travel the world. They eventually meet up with their old teachers Storm, Professor X, Wolverine, and Magneto. They decide to send Logan back in time to end the war before it ever begins. Iceman stays with Kitty as she sends Logan back in time. During which, Logan stabs Kitty and she begins to lose a lot of blood so he tries to convince Charles and Magneto to let her rest but they insist she continues. Later, the Sentinels attack the place and kill most of the X-Men. Iceman freezes the door to buy time but the Sentinels manage to break through. Bobby attempts to hold them off, but a series of energy blasts rip through his abdomen as he screams in pain, treating him to a painful death. Iceman did not die in vain however, as his tactics bought just enough time for the plan to go through, and time is successfully altered before the Sentinels can kill the remaining survivors.

Bobby is calm, composed, level-headed and sometimes laid-back, however, he is serious when it comes to his relationship with Marie D'Ancanto and being a member of the X-Men.

Iceman at the White House.

Iceman protects himself from Pyro's fire. 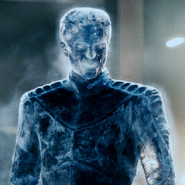 Iceman in his full ice form. 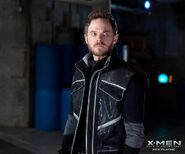 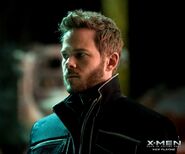 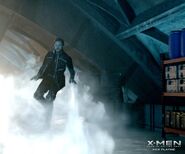 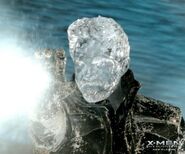 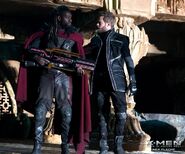 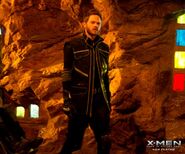 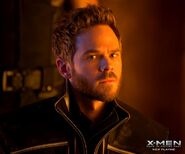 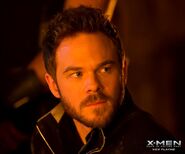 Iceman on the cover of Empire. 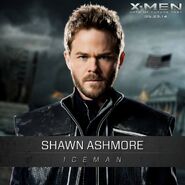 Concept art for Iceman in X-Men: Days of Future Past.

Concept art for Iceman in X-Men: Days of Future Past.