Roberto da Costa, also known as Sunspot, is a mutant who possesses the power to absorb and channel solar energy.

Roberto was sent to the Milbury Hospital after his mutant abilities manifested and burned his girlfriend Juliana accidentally. That trauma develops a fear of accidentally burning others. He would go on to meet Illyana Rasputin, Sam Guthrie and Rahne Sinclair; fellow mutants with their own dark past. Sometime later they would get another fellow Mutant Danielle Moonstar who's powers are unknown. As days pass the children warm up to each other and Eventually, the group come together when Illyana spikes Reyes' coffee with sleeping pills and they run amok on the grounds. They collectively believe that they are being trained to become X-Men, hence the strict supervision, as well as Cecilia Reyes reminding them that they are considered dangerous and should not leave until they are under control. Later, Roberto is swimming with who he believes to be Illyana, until she disappears and the burning manifestation of his girlfriend Juliana appears. Reyes awakens in time and puts a panicking Roberto out in the pool. He demands that they leave and during the confrontation, Reyes puts Illyana in solitary confinement. Eventually the group discovers that Reyes has been lying and that a corporation known as the Essex Corporation plans on using them as mutant killers. However before this can happen the Demon Bear of manifestation of Dani's own powers kills Reyes and proceeds to hunt them. Eventually, Roberto overcomes his fear of burning others and along with Sam aid Illyana in fighting Demon Bear. As the sun rises, the New Mutants collect their belongings. Sam notices that the barrier is no longer around them and they all decide to head into town after Reyes had previously told them that the nearest town was twenty miles out. Not knowing if she was telling the truth, they all decide to head out together as a family; facing the unknown.

Roberto was born in one of the richest families in Brazil and throughout his life he was pampered by his parents, so he developed a conceited personality, feeling on many occasions above others and emphasizing that he is rich whenever he can, even going so far as to throw your clothes away simply because of a stain. He also shows others that he is very womanizing and that he has been with many girls, when in fact he has not been with anyone, as demonstrated when he underwent a lie detector test.

However, this is all a protective cloak to hide his inner fears of using his powers and hurting someone. Since in the past he burned his girlfriend by not being able to control how hot she was getting at that moment. During his time at Milbury Hospital, Roberto developed certain feelings for his partner Illyana, feeling a certain attraction for her, as shown when he had a vision of her in the pool and when he said that he was going to marry her, after seeing her battle the Demon Bear. In addition, he also forged a great friendship with Sam. During the battle against the Demon Bear, Roberto finally overcame his fears of being able to burn others with his powers and used them efficiently against the Bear, gaining greater confidence in himself. 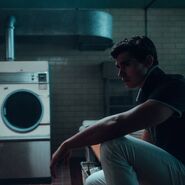