Guardians of the Galaxy
Captain Marvel

"Behold! Your Guardians of the Galaxy, what fruit have they wrought? Only have my father and his father shall finally know vengeance. People of Xandar, the time has come, to rejoice and renounce your paltry gods! Your salvation is at hand!"
―Ronan[src]

Ronan the Accuser was a rogue Kree Commander and a powerful enemy of Xandar and the Guardians of the Galaxy.

In the Kree-Skrull War, Ronan was leader of the Accusers and in charge of the Accuser Warships. In 1995, Ronan sent three warships to accompany Starforce to the planet Torfa where they dropped Warheads to clear out and distract the Skrulls so that Starforce could find and extract Kree scout Soh-Larr.

After Starforce's failure, Ronan contacted Yon-Rogg, blaming him for the failed mission. He demanded that Yon-Rogg tell him where the Skrulls had taken Vers so that he could dispatch his Accusers to deal with it. Yon-Rogg told Ronan that they were lost to which he warned that they must find them or he would.

Yon-Rogg summoned Ronan and told him they were on planet C-53. Ronan traveled to Earth with four Accuser Warships and instructed them to unleash warheads on Earth. Ronan was shocked when the warheads were stopped claiming Earth had nothing powerful enough to stop a Kree warhead. Carol Danvers flew up and completely destroyed one of the warships single handedly and then approached Ronan who ordered a retreat, claiming they would come back for the weapon, referring to Carol, later.

Ronan was one of many who were seeking the Orb.

On the Dark Aster, Ronan was awoken from his bloodbath to receive news from Korath that Star-Lord had retrieved the Orb, prompting Ronan to send his apprentice Nebula to pursue him, only for Gamora to instead volunteer. After Gamora is imprisoned in the Kyln, Ronan is called into Sanctuary, where he arrives with Nebula. Ronan kills The Other and declares Gamora a traitor, leading Thanos into ordering her subjugation.

Ronan arrives at Knowhere after responding to Drax's call, challenging him to a fight. As Rocket, Gamora, and Quill escape in mining ships as Nebula pursues them, Ronan severely beats Drax, stating that he doesn't recall killing his family, nor will he remember killing Drax, and throws him into a vat of preserve fluids. Nebula receives the Orb and leaves Gamora for dead in space, leading into her and Quill being abducted by The Ravagers.

Aboard the Dark Aster, Ronan absorbs the energy of the Infinity Stone, transferring it to his warhammer. He then contacts Thanos, informing the warlord that he is no longer part of the deal, promising to destroy Xandar himself before coming for Thanos personally. He seeks revenge after his ancestors were killed by the Nova Corps. Once his ship reaches Xandar only to be met by an enormous smokescreen courtesy of the Ravagers, Ronan soon orders his fighters to kamikaze the city, all the while hiding within his control chamber.

The Guardians finally confront Ronan, who is found to be nigh-invincible due to the power of the Infinity Stone, although he is quickly pummeled by the Milano. As the ship goes down, Groot sacrifices himself to protect the group, who all survive only to once more be met by Ronan.

As Ronan begins to monologue, he is humorously distracted by a dancing Quill long enough to be shot by Rocket's cannon by Drax, destroying his Warhammer. Working together, the Guardians channel the power of the Infinity Stone, allowing them to survive holding it. As an enraged Ronan charges a final time, Quill fires a blast of energy that kills Ronan.

Ronan was a member of the Accuser Corps, who are the Kree equivalent of military governors and jurists. Ronan in this role became known as Ronan the Accuser. Ronan several times referred to as being one of the most cruel and merciless warlord in the Galaxy. He has hatred for the Xandarians for the death of his father and his forefathers during the thousand years war against them. When the Kree and the Xandarian signed a peace treaty, Ronan defected from the Kree Empire. Ronan begin to attack Xandar planets, he forges an alliance with Thanos, agreeing to bring him The orb in exchange for Thanos destroying Xandar. When Ronan got The Orb, he breaks his deal with Thanos, taking the Infinity Stone inside the sphere and attacking Xandar. He destroys the Nova Corps fleet and is confronted by The Guardians who destroy his ship. Surviving he prepares to destroy Xandar but is distracted by Star-Lord allowing Drax and Rocket to destroy his Universal Weapon freeing the stone. The Guardians seize the stone and use it to destroy Ronan. 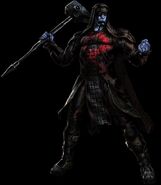