Scott Summers, also known as Cyclops, is a class 4 mutant whose eyes constantly emit beams of concussive force. Referred to Charles Xaviers's school by his older brother, Alex Summers, Scott was accepted in 1983. He joined the X-Men under the tutelage of Mystique and Beast after helping to defeat Apocalypse.

While Charles Xavier used Cerebro to locate other mutants, a boy with sunglasses and a baseball glove is one of the many he sees.

"Not all of us can control our powers."
―Cyclops[src]

In an Ohio high school class, the teacher is talking about how the world reacted to mutants in 1973. Scott keeps blinking and has problems with his eyes, but a school jock accuses him of winking at his girlfriend. The teacher asks what is happening, and Scott says that he needs to be excused because he has problems with his eyes. In the bathroom, the jock looks for him, angrily. He pounds on his bathroom stall, and Scott releases optic blasts for the first time, his mutant powers triggered. The jock is hit by the stall door and sent back after the optic blast is released.

At home after the incident, Scott wears a blindfold because without it, he'd release optic blasts. He refuses to talk with his parents and so he is taken to Xavier's School in New York by his older brother, Alex. Upon entering the school, he bumps into Jean Grey, who talks to him telepathically. After this, he is introduced to Xavier, who had just finished giving a lecture.

Hank McCoy and Xavier teach him how to control his optic blasts. After destroying Xavier's favorite tree with an optic blast in target practice, Scott asks if he will be expelled. Xavier tells him that he will be accepted.

After this, Hank gives Scott sunglasses with ruby quartz lens so that he can open his eyes without releasing blasts everywhere. He is able to see Jean for the first time and becomes attracted to her. Scott, Jean, Kurt and Jubilee later go to the movies, seeing Return of the Jedi.

When En Sabah Nur and the Four Horsemen of Apocalypse arrive at Xavier's Mansion, in the Cerebro Room, Alex tries to stop them with a blast when they abduct Xavier. However, he accidentally causes an explosion that destroys the mansion and is killed in the process. Peter uses his super speed to save everyone else, including Scott, when the mansion explodes.Scott looks for Alex and is disappointed to hear that he is dead. William Stryker and his men abduct Hank, Raven, Peter, and Moira, taking them to a military facility for interrogation. Scott, Jean, and Kurt follow covertly. Jean frees Logan, who is then known as Weapon X, a test subject of Stryker. Weapon X kills all of Stryker's soldiers while Scott, Jean, and Kurt free the others. Jean gives Weapon X some of his memories back and he then escapes the facility, running off into the wilderness.

In Egypt, Scott helps the others and fights Ororo. He later fights off En Sabah Nur physically, while Xavier fights him telepathically in the astral plane. Eventually, Jean unleashes her full power to destroy En Sabah Nur, her Phoenix powers manifesting. Angel was killed while Ororo and Magneto had betrayed En Sabah Nur and fought him. Psylocke fled during the battle.

Raven and Hank train Scott, Jean, Kurt, Peter, and Ororo to be the new X-Men members.

"That's not what Raven would've wanted. You know that. You both do."
―Scott to Erik and Hank[src]

In 1992, nine years after defeating Apocalypse, Scott is now known as Cyclops, and a proud member of X-Men, who are now recognized as national superheroes, and is also in a romantic relationship with Jean Grey. However, this new fame has stroked Professor X's ego, who encourages them to embark on increasingly dangerous missions. One such mission leads into space to rescue the the crew of the Endeavor, and an unforeseen consequences which resulted in Jean transforming into the Phoenix.

While Jean had survived the event, and her psychic powers were greatly amplified as a result Scott was also worried about her as he had thought he had lost her. Jean, however, assures him that she was fine and that no matter what she would always come back to him. At the same time, unknown to many of the X-Men mental block placed by Xavier were being destroyed in Jeans mind and as a result she accidentally attacks the mutants celebrating outside Xavier's school after a mental breakdown, passing out afterward. When Jean awakens after having ejected Xavier from her mind she decided to travel to her childhood hometown of Red Hook, New York, after discovering that her father is still alive. Scott tried to stop her but Jean used her powers to knock him unconscious not wanting to risk hurting him. Scott and The X-Men tracked Jean down attempted to take her home as Scott begs Jean to come back to them assuring her that they would figure everything out. However, a fight breaks and Jean ends up severely injuring Peter and accidentally killing Raven and several local police officers before flying away.

After Raven's funeral, Scott tries to assure the students that Raven's death was an accident and that no matter what she had done, Jean was still their friend and they could still help her. The next day, Scott tells Xavier that Hank is gone. Using Cerebro, they discover that Hank, feeling betrayed by Xavier's manipulation of Jean's memories and seeking vengeance for Raven's death, has allied with Erik and the mutant refugees of Genosha in an attempt to put down Jean in New York City.

Upon learning of Erik's plan to kill Jean, the X-Men confront him and his faction in New York. As they battle, Xavier manages to enter the building where Jean is. Scott follows and comes upon the alien Vuk attempting to drain Jean of the Phoenix nearly killing her, Scott interrupts it by blasting Vuk away and Jean is knocked unconscious in the process. Both mutant factions, including Jean, are then taken into custody by the Mutant Control Unit and placed on a train headed towards a secret containment facility.

On the train, a remorseful Xavier admits to a very resentful Hank and angry Erik that he was wrong in violating Jean's mind and lying to her and Scott tells them that Jean is not at fault for her actions and that Raven wouldn't want them to just let Jean die. The train is attacked by Vuk and her fellow aliens: The D'Bari. When the soldiers are overpowered by the shape-shifters, the mutants are freed from their restraints to combat the threat. Scott helps Xavier get to an unconscious Jean where he confers with her within his mind, allowing Jean's personality to gain control of the force within her. Jean saves Scott and Xavier and others from Vuk's attacks and the ensuing train wreck, and then easily vaporizes the remaining D'Bari aliens when they attack her. Vuk once again attempts to drain Jean of the force, but Jean takes Vuk into outer space, then takes the stolen power from the D'Bari and unleashes it, killing her. Jean then disappears into space. Scott, still missing Jean, assists in the renaming of Xavier’s School for Gifted Youngsters to the Jean Grey School for Gifted Youngsters.

Due to Logan traveling back in time and altering the past, Scott and Jean no longer died and are still active within the X-Men.

Scott in the 80s is notably more rude and sort of a "bad boy" openly insulting a fellow student after he took problem with what he perceived as Scott flirting with his girlfriend and got off on the wrong foot with Jean Grey when the latter communicated with him psychically. However, after being accepted into Xavier's School and the death of his older brother, Alex, Scott becomes more responsible and heroic.

By the 90s, Scott had become a full fledged and committed member of the X-Men. Staying by Xavier's side even after his role in Jean's transformation into the Phoenix was revealed.

A possible image of Scott Summers in X-Men: First Class.
Add a photo to this gallery 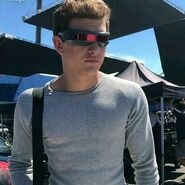 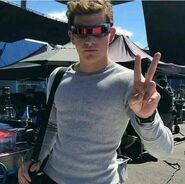 Retrieved from "https://marvel-movies.fandom.com/wiki/Scott_Summers?oldid=279800"
Community content is available under CC-BY-SA unless otherwise noted.