Sharon Carter, formerly known as Agent 13, is a CIA agent and a former agent of S.H.I.E.L.D..

Sharon left S.H.I.E.L.D. after it was disbanded, when it was discovered that the organization had been infiltrated by HYDRA and joined the CIA where she served as the CIA's liason for the Joint Counter Terrorist Centre.

During the Avengers Civil War, Sharon helped Steve Rogers and Sam Wilson get their equipment back from the Joint Counter Terrorist Centre Building. As a result of helping Captain America and his faction of Avengers, who opposed the Sokovia Accords, she became a fugitive of U.S. government.

After going on the run, Sharon established herself as a black market art dealer in Madripoor, becoming the secret ruler of the city's criminal underworld known as Power Broker.

The Avengers believed that Sharon was one of the victims of the Decimation when Thanos completed the Infinity Gauntlet and wiped out half the life in the universe, but in reality she was hiding in Madripoor.

After helping the Sam Wilson and Bucky Barnes take down the Flag Smashers, Sharon was granted a full pardon and reinstated into her old position in the CIA, allowing Sharon to secure direct access to government resources for her buyers in Madripoor.

Sharon was born in New Orleans, Louisiana in the United States to her parents, Mr. Carter and Mrs. Carter. She also had a paternal great-aunt, named Peggy Carter who she had looked up to since childhood.

Sharon grew up listening to stories about Steve Rogers/Captain America from her great-aunt, Peggy, as a result; she gained a high opinion of Steve.

Later in life, Sharon would follow in Peggy's footsteps; joining S.H.I.E.L.D., becoming one of the finest agents of the organization.

Nick Fury assigned Sharon to watch over Steve Rogers as his next door neighbor. Natasha Romanoff attempted to get Steve to ask her out, but had no success convincing him. When Nick Fury was shot at Steve's apartment, Sharon arrived, blowing her cover. She stayed with Fury until help arrived but he seemingly died.

Later, Sharon was part of a team ordered to hunt down Steve in the investigation of Nick Fury's death. When Steve hacked into the speakers and revealed HYDRA's plans, she participated in helping Steve and staying true to S.H.I.E.L.D.. After S.H.I.E.L.D.'s collapse, Sharon joined the CIA .

"Margaret Carter was known to most as the founder of S.H.I.E.L.D. But I just know her as Aunt Peggy. She had a photograph in her office: Aunt Peggy standing next to JFK. As a kid that was pretty cool. But it was a lot to live up to, which is why I never told anyone we were related. I asked her once how she managed to master diplomacy and espionage at a time when no one wanted to see a woman succeed at either. And she said, "Compromise where you can. Where you can't, don't. Even if everyone is telling you that something wrong is something right. Even if the whole world is telling you to move, it is your duty to plant yourself like a tree, look them in the eye, and say, 'No, *you* move'.""
―Sharon Carter[src]

Following the Decimation, Sharon was incorrectly identified as one of the many individuals who were killed along with half of all life in the universe.

Initially, Sharon is guided by a strong moral compass and is not afraid to speak out when her ethics are challenged.

In Captain America: Civil War, Sharon is one of the few individuals who did not support the Sokovia Accords; due to the fact that she realize that the world's governments were trying to blame the Avengers for situations that were not their fault to begin with, which is why she sided with Steven Rogers, like Steve, she puts her morals and honor first, and logic second.

Sharon is very loyal to her comrades and friends, during the Avengers Civil War, she helped Steve and Sam Wilson to get their equipment back from the Joint Counter Terrorist Centre Building, after the latter and his faction of Avengers (openly) went against the accords to protect Bucky Barnes from the government, she has no regrets for helping Steve despite knowing that she would become a fugitive of U.S. government.

Sharon is proven to have a sense of humour, after eventually sharing a kiss with Steve; who she had developed romantic feelings towards, the two of them joking state that it was "late".

In The Falcon and the Winter Soldier, after 7 years of being on the run from the U.S. government, Sharon's status as a fugitive has made her far more cynical and hardened; despite this, she enjoys her life outside the law, working as a black market art dealer in Madripoor.

Although Sharon lives luxuriously, she still misses her old life; prior to her becoming a fugitive.

However, Sharon's desire to get her old life back, is ultimately nothing more than a façade. In truth, she has become a selfish, manipulative, power-hungry and vengeful individual, as he wants to get revenge on the U.S. government for branding her a criminal and to control the world through her criminal empire.

Sharon is quite cold, cruel, sadistic and ruthless towards individuals who threaten her authority or try and double-cross her, which was demonstrated when she hunting down and killed Karli Morgenthau for disobeying her orders, as she feels no guilt, shame or remorse for any of her actions; proving that Sharon's personality has not only become far more darker, but she has also lost her sense of justice, honor and morals in the process. 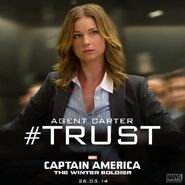 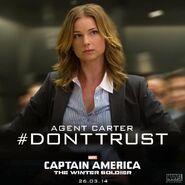 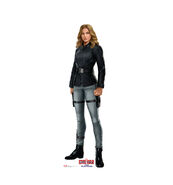 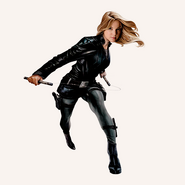 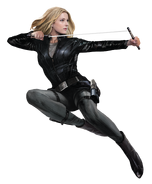 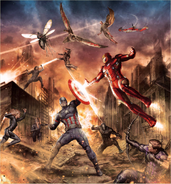 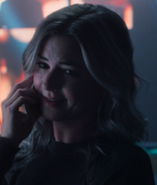 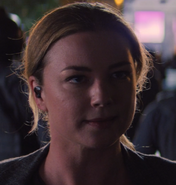