"I will die a warrior's death! Stories will be told of this day!"
―Sif[src]

Sif is an Asgardian warrior and a friend of Thor Odinson, Sif is also the Asgardian Goddess of War. Sometime after Loki Laufeyson send Odin Borson to Earth and impersonated him, she was banished from Asgard by Loki (under the persona of Odin) due to her being a risk in exposing him; Sif's current whereabouts are unknown.

Sif was among the many who died when Thanos completed the Infinity Gauntlet and wiped out half the life in the universe. However, five years later, she was resurrected by Bruce Banner; via the Infinity Stones.

Along with Loki and the Warriors Three, Sif was convinced by Thor to attack Jotunheim, in response of an attempt by some Frost Giants to steal the Casket of Ancient Winters. While in Jotunheim, Sif fought alongside her friends against an army of Giants led by Laufey himself, and managed to slay many of them, but was forced to flee when they were outnumbered. Eventually, the team was saved by Odin, who intervened to prevent their killing. Helpless, Sif watched as Thor was banished to Earth.

Some days later, Sif persuaded the Warriors Three to ask Odin to recall Thor back home, but when they arrived in the throne room, they found Loki sitting as the new ruler of Asgard, as a substitute to Odin who had fallen into Odinsleep. Loki denied their request to call his brother back, but they decided to ignore his order and to go to Midgard anyway. Heimdall agreed with them and opened Bifrost Bridge for them, and the four gods arrive on Earth, in New Mexico. They found Thor and discovered that he had been tricked by Loki's lies. Later, The Destroyer was sent to Earth by Loki to kill Thor and the other Asgardians, and Sif engaged it in battle with her allies. While the Warriors Three bought her some time, Sif jumped from a rooftop onto the Destroyer's back attacking it from above, piercing its chest with her sword in its staff-like form. Immediately after, however, the Destroyer regenerated itself and almost killed Sif with an energy blast shot from its eyes. Sif fled with her companions, leaving Thor, who claimed to have a plan, behind, but only to witness his sacrifice and his rebirth in his divine form.

After Odin used dark energy to send Thor to Earth to retrieve Loki and the Tesseract, Sif informed Heimdall that the Allfather was weak but under Eir's care. She then asked about Thor and Heimdall informed her that Thor survived the journey.

"I had things under control!"
―Sif[src]

After the Battle of New York, Sif was battling in Vanaheim when Thor arrived, despite her claims she was in control. After Thor quelled the events, Sif had noticed Thor had become distracted as of late. It was shown Sif has feelings for Thor, but he was unable to reciprocate them because his heart belonged to Jane Foster. When Jane arrived on Asgard, Sif glared at her, clearly jealous of her, but none the less helped Thor escape with her to the Dark World with Loki. She was presumably charged with treason because of her involvement, but released due to Thor's action on Earth. After the conflict Sif and Volstagg gave the Aether to the Collector.

"Your world is in grave danger!"
―Sif[src]

Sif arrived on Earth, tracking to capture the Sorceress Lorelei, who had escaped during the Dark Elf invasion of Asgard. She was greeted by S.H.I.E.L.D. agents, but was shocked by the fact that Agent Coulson had returned from the dead. Sif explained Lorelei's powers over men and that a magical collar is key to stop her. After tracking her to a local biker gang, she assisted Agents Coulson and Ward in fighting her brainwashed minions, but failed to stop her escaping with Agent Ward. With the collar damaged, Sif and Melinda May had a heart to heart about Lorelei's history with Sif as well as how Lorelei finds a special thrill in enslaving men that are already taken, such as Agent Ward was with May at the time. When Ward and Lorelei took the SHIELD's flying base, Sif was locked in the interrogation room and blown out of an airlock, however thanks to intervention by Skye, she managed to get back inside to confront Lorelei. In a vicious swordfight between the two, Sif got the upperhand and managed to get the repaired collar around her neck. She escorted Lorelei back to Asgard and said her farewells to the S.H.I.E.L.D. agents.

Heimdall detected the arrival of a Kree on Earth, so Odin sent Sif back to Earth to apprehend this newcomer. Sif tracked down her quarry to Faro, Portugal, and engaged him in broad daylight on a crowded pier. Though she managed to damage the Kree's device that allowed him to masquerade as human, Vin-Tak hit her with his truncheon, which erased all memory of her identity and mission, and tossed her into the sea. By the time she made it back to shore, it was nightfall and all she could recall was the word "Kava". She soon came to the attention of S.H.I.E.L.D., and after they reconstructed her last movements and the identity of her quarry, she realized that "Kava" was the Kree word for "keys". This revelation enabled S.H.I.E.L.D. to narrow down the Portuguese city called "Chaves" translating into "keys", where they captured Vin-Tak.

Vin-Tak insisted he was not a threat, and upon their return to the Playground he used his truncheon to restore Sif's memories. Vin-Tak then revealed that he was on Earth due to a Diviner being used. They soon determined that Skye was an Inhuman when she caused a seismic disturbance. S.H.I.E.L.D. moved to protect Skye as Sif pursued her, insisting that she must be taken back to Asgard for protection. However, Skye shot herself with an I.C.E.R. to stop the tremors.

The next day, Sif took a brainwashed Vin-Tak who has his mind wiped back to Asgard so he could be sent home. Before they left, Sif asked Coulson if he was sure he wanted to keep Skye on Earth due her dangerous power, he said he did.

Sif was one of the many victims of the Decimation at the hands of Thanos with the Infinity Gauntlet.

Five years later, Sif, along with all the other victims of the Decimation, was resurrected by Bruce Banner via the Infinity Stones.

Being the only female warrior in Asgard, Sif is very proud and always eager to prove herself. She's the closest of friend with Thor and the Warriors Three, and she is an honorable warrior on the battlefield. She often is independent and uneasy in following orders. Sif is the first person to suspect Loki of treason following Thor's banishment, proving that she is very observant.

Sif insisting it is forbidden to go to Jotunheim. 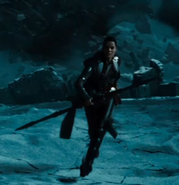 Sif running from the Frost Monster.

Sif and the Warriors Three surprised to see Loki on the throne of Asgard.

Sif and the Warriors Three kneel before Loki.

Sif and the Warriors Three arrive on Midgard/Earth.

Sif and the Warriors Three march toward the Destroyer.

Sif mistakenly believes she has destroyed the Destroyer.

Sif mistakenly believes she has destroyed the Destroyer.

Sif and Thor hide from the Destroyer.

Sif at a banquet in Asgard.
Add a photo to this gallery 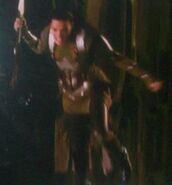 Jaimie Alexander as Sif on the set of Thor. 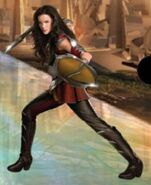 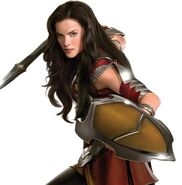 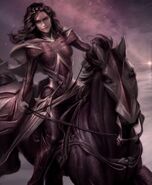 Concept Art.
Add a photo to this gallery

Jaimie Alexander on set as Sif.

Jaimie Alexander on set as Sif.

Concept art of Sif.
Add a photo to this gallery 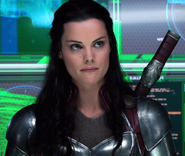 Retrieved from "https://marvel-movies.fandom.com/wiki/Sif?oldid=276252"
Community content is available under CC-BY-SA unless otherwise noted.