Spider-Man is a 2002 superhero film based on the Marvel Comics character Spider-Man which follows the origins of Superhero and his battle with Green Goblin. The film is the first in the Spider-Man film series. It was followed up by two sequels, Spider-Man 2 and Spider-Man 3.

Peter Parker, Harry Osborn and Mary Jane Watson visit a genetics laboratory with their high school class. While taking photos in the laboratory, Peter is bitten on the hand by a genetically engineered "super spider", and arrives home and passes out with the bite wound considerably swollen. Meanwhile, Norman Osborn, Harry's father, attempts to preserve his company's military contract from a rival firm, personally experimenting with his company's new but unstable performance-enhancing chemical vapor to increase his speed, strength, and stamina. Afterward, he goes into an uncontrollable rage and kills his assistant. The next morning, Peter finds that his previously impaired vision has improved to 20/20 and that his body has metamorphosed into a more muscular physique. When Peter goes to school, he finds himself producing webbing and having the quick reflexes to avoid being injured in a fight with Flash Thompson. Peter escapes from the school and realizes that he has acquired spider-like abilities from the spider bite. Peter quickly learns to scale walls, long jump across building rooftops and swing using webs from his wrists.

Lying to his aunt and uncle about where he is going, Peter decides to enter a wrestling tournament to get money to buy a car and impress Mary Jane . During an argument, Uncle Ben advises Peter, "With great power comes great responsibility." Peter lashes out at his uncle and leaves for the tournament. Peter wins, but is cheated out of the contest money; in retaliation he allows a thief to escape with the promoter's gate money. Afterward, Peter finds his uncle has been carjacked and killed. Peter tracks down the carjacker only to find out it was the same thief he allowed to escape earlier. During the struggle, the carjacker falls out of a window and is killed. Upon graduating, Peter decides to use his abilities to fight injustice, and dons a new costume and the persona of Spider-Man. Peter is hired as a freelance photographer when he arrives in newspaper editor J. Jonah Jameson's office with the only clear images of Spider-Man.

Norman, upon finding out that Oscorp's board members plan to sell the company, attacks them at the World Unity Fair. Jameson quickly dubs Norman as the Green Goblin. The Goblin offers Spider-Man a place at his side as he sees how the authorities mistrust him, but Spider-Man refuses, knowing that it is the right thing to do. The Goblin commits arson to engage him with a final offer, which Spider-Man refuses, and the Goblin becomes set on killing him. At the Osborn and Parkers' Thanksgiving dinner, Norman notices Peter's wound from the masked confrontation and leaves shortly thereafter. Feeling betrayed by Peter, and having found a personal annoyance with Aunt May, he attacks her. Whilst she recovers in the hospital, Mary Jane admits she has a crush on Spider-Man, who rescued her on numerous occasions, and asks Peter whether he ever asked about her. Peter reflects on his own feelings, during which Harry Osborn enters. Feeling betrayed by his girlfriend, Harry becomes fully loyal to his father, and tells him whom Peter loves the most.

The Goblin strikes, holding Mary Jane and a tram car full of children hostage on top the Queensboro Bridge. The Goblin tells Spider-Man to choose who he wants to save, and when Spider-Man refuses to choose, the Goblin drops his hostages. Spider-Man manages to save both Mary Jane and the tram car, whilst the Goblin is pelted at by civilians, showing loyalty to Spider-Man and proving him wrong by telling the Goblin that if "you mess with him, you mess with New York." The Goblin then grabs Spider-Man and throws him into an abandoned building and begins to beat him. The tables turn as the Goblin boasts of how he will later kill Mary Jane , and an enraged Spider-Man forces him into being unmasked. Norman begs for forgiveness, but his Goblin persona attempts to remote-control his glider to impale Spider-Man. The superhero evades the attack, causing the glider to impale Norman instead, and he dies asking Peter not to reveal his secret to Harry. At Norman’s funeral, Harry swears vengeance toward Spider-Man, who he believes is responsible for killing his father, and asserts that Peter is all he has left. Mary Jane confesses to Peter that she’s in love with him, but Peter, feeling that he must protect her, hides his true feelings. As Peter leaves the funeral, he recalls Uncle Ben's words, "With great power comes great responsibility".

The film was shot in New York and Los Angeles, California. 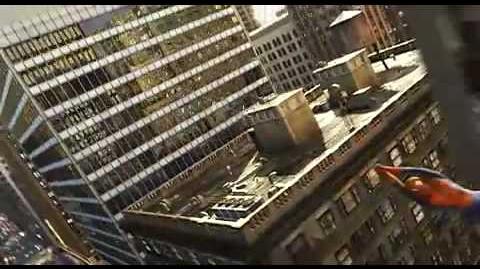 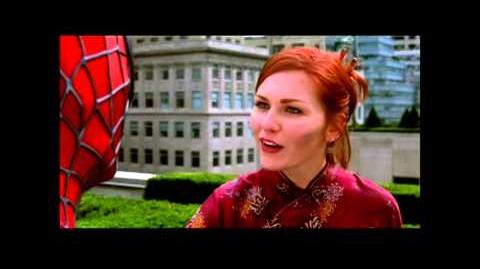 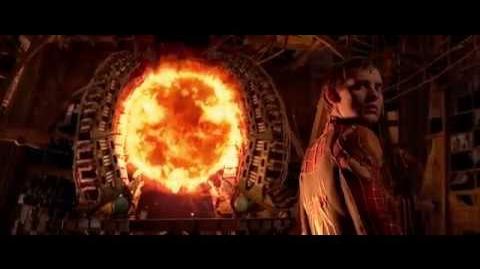 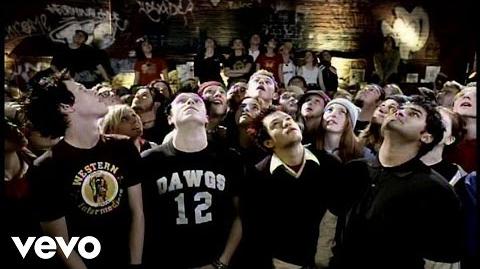 Retrieved from "https://marvel-movies.fandom.com/wiki/Spider-Man_(2002)?oldid=272182"
Community content is available under CC-BY-SA unless otherwise noted.