Marvel Movies
Register
Don't have an account?
Sign In
Advertisement
in: The Incredible Hulk culture, Captain America culture, The Falcon and the Winter Soldier culture, Formulas

Captain America: The First Avenger
The Incredible Hulk
Captain America: Civil War
The Falcon and the Winter Soldier
The Super Soldier Serum was a serum developed by Weapons Plus, led by Abraham Erskine under the alias of Josef Reinstein during World War II. The serum provided the subject with increased stamina, speed and strength, however the serum was only successfully used by the program once before the program was "put on ice" by the United States government, with the test subject Steve Rogers.

Before Captain America: The First Avenger

During the 1930s, Dr. Abraham Erskine worked in a German university doing research into the serum. However in 1935, the German doctor left his work in an attempt to escape Germany to avoid the racist Nazi laws but HYDRA leader Johann Schmidt, who took an interest in Erskine's work, intercepted the scientist on the German/Swiss border on September 14th.

Five years later in the Bavarian Alps, Schmidt took part in an test involving Erskine and his Super Soldier Serum which turned Schmidt into what he would become known as the Red Skull. Erskine was rescued by Peggy Carter and brought into the US Secret Strategic Scientific Reserve as part of the Project Rebirth program along with Howard Stark to produce America's own Super Soldier.

After a long search for the perfect subject, the frail Steve Rogers was found and transformed into the perfect human specimen; becoming Captain America. However after the experiment, Erskine is killed by a HYDRA agent.

The serum was successfully used on Steve Rogers by the Weapons Plus program. However, further attempts to recreate the serum failed and it was decided that instead of using Rogers to fight the enemy, he would be used to inspire the American solders. That is until he found that members of the 107th, including Bucky where captured in a nearby HYDRA facility. With the help of Stark and Carter, he crossed enemy lines to get them back. By doing this, Phillips finally gave him active duty status and gave him command of the Howling Commandos. He led them on many missions against HYDRA, resulting in only one lost, Bucky during the train battle. However, thanks to the serum flowing in his veins, Bucky was able to survive, though at the loss of his left arm. He was found by Soviet soldiers who was HYDRA. Steve finally led his forces against HYDRA in the final days of the war and battled Red Skull one last time, resulting in his defeat and disappearance into space unknown and Rogers to crash land his plane into the Arctic to prevent it from fulfilling its mission. He was declared missing, presumed killed in action. However, the cold temperatures of the Arctic combined with the effects of the serum on his body is what kept him alive but in hibernation for decades until he was found by S.H.I.E.L.D. in the modern day. It slowed his vitals, including his aging process to a halt and kept him well preserved.

It is revealed to Emil Blonsky that during WWII the U.S. military was attempting to create super soldiers using various formula, but with only one showing promise. This formula was part of Weapon Plus and developed by Dr. Reinstein. The project was eventually shelved until it was uncovered by General Thaddeus Ross. Ross used subterfuge to get his daughter, Dr. Betty Ross, and her partner, Dr. Bruce Banner, to work on the project. The two scientists believed that they were working on radiation resistance. Banner was so convinced in the results of his project that he he subjected himself to the treatment. The results caused his body chemistry to be altered in such a way that whenever he became angry or outraged a startling metamorphosis occurred. In the initial transformation Banner's muscle mass and size increased dramatically and skin became green. Turning into an incoherent monster, Banner destroyed the lab and severely injured Dr. Ross. Learning that General Ross wanted to turn the monster into a weapon Banner fled in search of a cure.

When the Hulk resurfaced and defeated a unit of Ross' elite soldiers, the General offered the serum to Emil Blonsky, the only soldier to come out unscathed in a conflict with the Hulk. Blonsky underwent the first of two treatments, consisting of deep muscle and painful bone marrow shots. In the next encounter with the Hulk, Blonsky displayed increased speed, endurance, and agility. However as the fight went on he became more aggressive and rashly stood before the Hulk challenging him. The Hulk kicked Blonsky into a tree shattering almost every bone in his body.

It appeared that Blonsky was near death, however he underwent a miraculous full recovery just a day or so later. Not only was he healed but his muscle mass had increased and his overall body fat decreased. Blonsky underwent another treatment. However, shortly thereafter he showed pronounced spinal ridges on his back. Blonsky became even more agressive when Banner was tracked to the lab of Dr. Sterns, a scientist who had been aiding Banner, for his own gains.

After Blonsky savagely beat Banner, who was taken into custody by Ross, he disabled the troops guarding Sterns. Sterns, eager to see the various applications of the gamma agreed to Blonsky's demand to get the power of the Hulk (albeit reluctantly) however, Sterns warned him that he was unsure how the gamma would react with the super soldier serum. Blonsky lost his temper and threatened Stern's life; until he agreed to it. The resulting combination drove Blonsky mad, along with giving him strength and size similar to that of the Hulk. Blonsky was dubbed the Abomination as he set to destroying New York city until he was defeated by the Hulk.

It should be noted that the serum used by Ross on Blonsky was most likely created from what the army could piece together of Dr. Reinstein's notes and research with analysis of Steve Rogers blood as all complete samples were destroyed right after Steve became the first successful super soldier. This would explain the side effects Blonksy exhibited (body deformation and mental deterioration) and accelerated healing ability which was not present in Steve Rogers (while Steve's body heals fast and is resistant to most poisons, infections, and resistance to aging, Steve could not heal all of his bones in a single day).

The Project Centipede scientists created a new version of the serum. Which was designed to give a person enhanced abilities. The serum was made up with the mixture of Gamma Radiation and Extremis, with technology from the Chitauri.

James Barnes is revealed to have survived his fall from Zola's Train due to the experiments performed on him with the Super Soldier Serum. Now possessing superhuman abilities of his own, Barnes is brainwashed by HYDRA into their assassin the Winter Soldier whose abilities from the serum allow him to match Steve Rogers in battle.

It is revealed that during Howard Stark's assassination, James Barnes as the Winter Soldier recovered five packets of Super Soldier Serum for HYDRA; who used the serum in an attempt at creating five more Winter Soldier operatives. While the serum enhanced their strength, it reduced them to a mindless state of brutality, suggesting that the serum was an imperfect attempt by Stark at recreating his late colleague's formula.

Doctor Wilfred Nagel was able to successfully recreate the Super Soldier Serum in Madripoor, after many years of studying the HYDRA Winter Soldier program serum and the blood sample of America second successful super soldier, Isaiah Bradley from the CIA. The vials of the serum were stolen by Karli Morgenthau and were given to the Flag Smashers. John Walker found the last vial and dosed himself. Eventually, Karli was killed by Sharon Carter while Oeznik killed the enhanced Flag Smashers with a car bomb on the orders of Helmut Zemo, leaving Walker as the only surviving Super Soldier from this particular batch of serum.

The serum's effect on the body is to increase the molecular density of cellular fibers (skin and muscle) through synthetic proteins. However, the serum not only enhances the the body and mind, but emotional traits are also amplified, particularly positive and negative emotions. Wilfred Nagel's serum was more subtle, there was no physical change but strength and other attributes were still amplified. 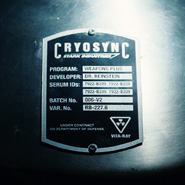 The specifications of the serum given to Emil Blonsky.

General Ross removes a vial of serum from cryo-storage. 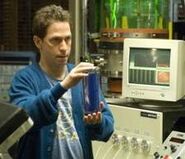