"Any more bright ideas? Why don't you strip down and have a hundred people stare at you?"
―Susan Storm [src]

Susan "Sue" Richards (nee Storm) is a member of the Fantastic Four known as Invisible Woman, who harnesses the ability to turn invisible and create fields and barriers of only pure force.

Sue, a brilliant scientist, leads Victor von Doom's Department of Genetic Research. She is dating Victor at the beginning of the film. Immediately prior to the arrival of the cosmic storm which grants her the ability to manipulate light (allowing her to disappear and generate semi-visible force fields), Victor proposes to her; she turns him down. Unlike in other media, Sue was not able to render her normal clothes invisible (her radiated spacesuit can become invisible with her, though). Although her powers are influenced by her emotions, she manages to control her abilities during the team's climactic battle with Victor. Sue accepts Richards' proposal of marriage.

Sue's wedding to Reed is interrupted by the arrival of the Silver Surfer. Sue reminds the Silver Surfer of the woman he loved back on his home-world. This association, and the friendship with Sue which follows, leads the Surfer to turn against his master, Galactus.

While attempting to shield the Silver Surfer with a force field, Sue is impaled in the chest with a spear created by a cosmic-powered Doctor Doom, and she dies unmarried in Reed's arms. However, Silver Surfer uses his cosmic powers to heal Sue, tarnishing himself in the process. Before leaving to confront Galactus, Silver Surfer tells Reed to treasure every moment with Sue.

Reed and a kimono-clad Sue are married in ceremony in Japan, moments before jetting off with Ben and Johnny to save Venice from sinking.

The Invisible Woman using her powers. 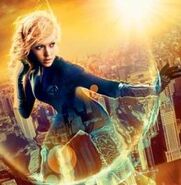