"Our people's blood is spilled on foreign soil. Not only because of the actions of criminals, but by the indifference of those pledged to stop them. Victory at the expense of the innocent is no victory at all."
―T'Chaka[src]

T'Chaka was the king of Wakanda. The son of Azzuri, the older brother of N'Jobu, the husband of Ramonda, the father of T'Challa and Shuri, and the uncle of N'Jadaka. He served as the Black Panther before passing the mantle onto his son.

After T'Chaka's death; his son, T'Challa succeeded him as the new king of Wakanda.

In the files on Ulysses Klaue, it's stated that T'Chaka was invited to the Bilderberg Conference and unbeknownst to him, Ulysses Klaue had been hired to kill him in case he refused to negotiate about Wakandan resources which included Vibranium. Klaue had a personal grudge against T'Chaka and his family because one of his ancestors was responsible for killing Klaue's great-grandfather.

T'Chaka, the King of Wakanda, joined the ranks of those who wanted the Sokovia Accords passed, after collateral damage in Lagos killed many innocents. Many of the innocents had been Wakandans. The collateral damage was a result of Wanda Maximoff failing to stop Brock Rumlow's suicide bomb, mistakenly redirecting it to a building.

When the Accords were going to be ratified at a conference in Vienna, a bombing happened, which killed T'Chaka. 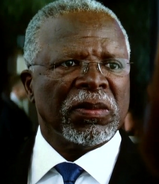 T'Chaka in his Black Panther suit.

T'Chaka in his prime.
Add a photo to this gallery
Retrieved from "https://marvel-movies.fandom.com/wiki/T%27Chaka?oldid=274231"
Community content is available under CC-BY-SA unless otherwise noted.