Marvel Movies
Register
Don't have an account?
Sign In
Advertisement
in: Earth-21818 characters, What If...? characters, Heroes,
and 5 more

T'Challa was the prince of Wakanda who was mistakenly abducted by the Ravagers. He became the renowned Star-Lord, a galaxy traversing Robin Hood figure.

T'Challa shared the history of his Sacred Timeline counterpart up until 1988.

Prince T'Challa complained to his father, King T'Chaka, about the seclusion of Wakanda. Though he understood his child's desire to explore, T'Chaka urged him to stay in Wakanda where he would be safe. As T'Challa wandered outside the barrier wall, he was abducted by the Ravagers, on their last assignment to recover the offspring of Ego. Yondu scolded Kraglin and Taserface for abducting the wrong kid, but was surprised by T'Challa's interest in exploration. He happily joined the group and they continued their adventures for the next twenty years.

On Morag, T'Challa, known as Star-Lord, entered the chamber holding the Power Stone. After retrieving it, he was intercepted by Korath, on orders from Ronan. Korath was a big fan of Star-Lord but still fought him in an attempt to recover the Power Stone for Ronan. Although he lost, T'Challa still took Korath with him. Yondu arrived to help T'Challa deal with the Sakaraans. The Ravagers left the planet.

In a bar, the Ravagers shared a drink and discuss T'Challa's greatest jobs. Thanos admitted that T'Challa convinced him to end his quest for the Infinity Stones. T'Challa encountered Drax as a bartender, who praised him for stopping Ronan's Kree invasion. Nebula approached T'Challa and discussed the Power Stone, asking if Thanos, her father, knew he had it. She also remarked about his necklace. T'Challa told her that Yondu tried to bring him back to Wakanda once, but found that it had been destroyed by another war. Nebula told him of a job to recover the Embers of Genesis, which could terraform a planet in minutes. T'Challa saw it as an opportunity. The Collector was the mark, as he had filled the power void left when Thanos went straight. Yondu disagreed with the job, but T'Challa managed to convince him.

The Ravagers went over the plan to pose as sellers on Knowhere to get past the Black Order by causing a distraction. Nebula and Yondu met the Collector while T'Challa looked for the Embers. He saw several prisoners including Cosmo the Space Dog. He freed Howard the Duck in an effort to find the Embers. Outside, Proxima Midnight confronted the Ravagers and realized that it was a diversion. She sounded the alarm as Howard was enjoying a drink during happy hour at the bar. T'Challa ran when he heard the alarm and came to a room housing a Wakandan Royal Talon Fighter. It had a video of his father pleading for the return of his son. Before he could think about it, he was taken by Nebula and imprisoned with Yondu and the rest of the Ravagers. T'Challa confronted Yondu about lying to him about Wakanda being destroyed. Yondu told him that the Ravagers were his family, but T'Challa told them they were not. Corvus Glaive arrived to take T'Challa to The Collector. In a glass cell, Tivan and T'Challa chatted before Tivan gave the order to Ebony Maw to dissect T'Challa. Nebula shot Corvus to reveal that their distraction plan worked, and she recovered the Embers. T'Challa broke free of the cage and was saved by Carina before Ebony Maw could kill him. T'Challa and Tivan fought, but T'Challa was no match for his collection of weapons, which included Captain America's Shield, Mjölnir and Hela's Helmet.

Yondu arrived to help T'Challa fight Tivan, who swiftly broke his Yaka Arrow. Yondu and T'Challa were able to beat Tivan by knocking him into his own cell. They gave control to Carina, who freed all of his prisoners before opening his cell. T'Challa and Yondu left with Cosmo the Space Dog on the Wakandan ship as Knowhere terraforms. T'Challa and Yondu discussed his desire to explore, and T'Challa decided to return them to Wakanda, where he reunited with his parents. He introduced the Ravagers as the family he made along the way. 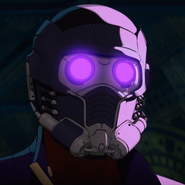 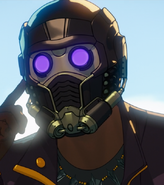