Stryker locates Logan and warns him that someone is killing members of the team; both Wilson and Bradley are dead. Shortly afterward, Victor murders Kayla and attacks Logan. Stryker offers Logan a way to beat Victor; Logan undergoes an operation to reinforce his skeleton with adamantium, a virtually indestructible metal. After the procedure , Logan runs, Zero tracks him down but is killed. Logan locates Wraith and Dukes and asks them about the location of Stryker's new facility, referred to as "The Island". They tell him to find Remy LeBeau aka Gambit, who escaped and knows the location of The Island. Logan and Wraith locate Gambit in New Orleans, Logan asks Gambit where is the island.

Outside, Logan finds Victor, who had just killed Wraith and the two fight. Gambit takes him to Stryker's facility on Three Mile Island. When General Munson tries to shut Weapon XI down, learning of Stryker's son and believing that he is too emotionally close to the situation, Stryker kills him. There, Logan learns that Kayla is alive and conspired with Stryker in exchange for her sister's safety. Enraged, Logan leaves. Victor then arrives, demanding the adamantium bonding promised for his service, but Stryker refuses on the basis that Victor would not survive the procedure. Victor attempts to kill Kayla , but Logan hears her screams and returns.

Logan defeats and nearly kills Victor, but Kayla stops him. Meanwhile, Stryker activates Weapon XI, a "mutant killer" with the abilities of other mutants created upon Wilson 's body, which Stryker refers to as "The Deadpool". Kayla and Logan free the imprisoned mutants, but during their escape they are found by Weapon XI . Logan lures Weapon XI to the top of one of the plant's cooling towers. Logan is almost killed until Victor intervenes. Logan decapitates Weapon XI and kicks him into the base of the cooling tower. As he falls, the head fires Optic Blast that cause the tower to start falling apart.

Victor departs and Logan is saved from the collapsing tower by Gambit. After Logan finds Kayla, Stryker shoots him in the forehead with adamantium bullets, rendering him unconscious. Kayla uses her persuasion powers to make Stryker drop the gun and commands him to walk away before dying from her wounds. Gambit returns as Logan regains consciousness, but the brain damage caused by the bullets has triggered amnesia. Gambit tries convincing Logan to come with him, but he declines, wanting to go his own way. 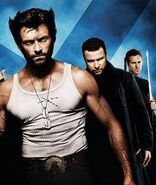 Wolverine and Victor Creed.
Community content is available under CC-BY-SA unless otherwise noted.