Captain America: The First Avenger
Iron Man 2
Thor
The Avengers
Thor: The Dark World Prelude
Guardians of the Galaxy
Avengers: Age of Ultron
Thor: Ragnarok
Avengers: Infinity War
Captain Marvel
The Tesseract, also known as the Cube, is a crystalline cube-shaped containment vessel for the Space Stone, one of the 6 Infinity Stones that predate the universe and possesses unlimited energy. In Avengers: Infinity War, the Tesseract was destroyed by Thanos; in order to retrieve the Space Stone.

In an alternate timeline created when the Avengers returned to 2012, Loki escaped custody using the Tesseract so it remains active in that altered timeline.

It was guarded by the Asgardians, the jewel of Odin's treasure room of relics, but lost during the last age of worship by men on Earth. It is found centuries later in the 1940's by Johann Schmidt (German SS officer and leader of HYDRA) in a box hidden in a sculptured mural of the world tree, Yggdrasil, within a viking ruin. Schmidt and scientist Arnim Zola used the power of the Tesseract to create weapons against the Allies and the entire world. Captain America foils Schmidt's plan to launch an aerial attack on the United States, and Schmidt disintegrates into light that shoots into space when he touches the Cube. After Captain America crashes Schmidt's plane, the Cube is recovered by Howard Stark.

In the 1980s, Dr. Wendy Lawson experiment with the Tesseract at Project P.E.G.A.S.U.S.. She designed and developed the Light-Speed Engine, using Tesseract energy to power it, in a bid to end the Kree-Skrull War.

After Lawson's death, the Tesseract remained in her laboratory until 1995. In 1995, Carol Danvers located the laboratory and boarded it with Nick Fury, Maria Rambeau and Talos. Carol put the Tesseract in a Happy Days lunchbox but before they could leave Starforce took them prisoner.

After Carol broke free, she offered the Tesseract to Fury to take but kept the lunchbox as a decoy. He correctly noted that he couldn't hold it when Goose revealed his true Flerken nature and devoured the cube.

The Tesseract remained in Goose's stomach until some time after Carol left Earth. Goose jumped on Fury's desk and coughed the cube up like a hairball.

While Tony Stark is flipping through his father's note book, a drawing of a hypercube is briefly seen on one of the pages.

A book on Norse mythology featuring illustrations of the Norse gods shows Odin holding an object that seems to be the Tesseract. Years after being lost in the ocean, the cube is now in the hands of S.H.I.E.L.D.. Nick Fury, believing it to be a powerful energy source, recruits Professor Selvig to study it.

After falling into the abyss of space, Loki eventually comes into contact with the alien race of the Chitauri and their masters, Thanos and his servant "The Other". Loki promises to retrieve the Tesseract from Earth and give it to them in exchange for their army.

Around this time, S.H.I.E.L.D. is planning to use the Tesseract to create weapons of mass destruction so Earth can defend itself in the event of an attack by enemies from other worlds. This was due to the battle between Thor and Loki, however, according to Thor, their work with the Tesseract was what drew Loki and the Chitauri to it.

After Fury has recruited Dr. Selvig to study the Tesseract, he has now been notified that it is "misbehaving". Fury arrives at a Project P.E.G.A.S.U.S. where the Tesseract opens a portal into space and transports Loki to the S.H.I.E.L.D. base. Loki immediately begins slaughtering S.H.I.E.L.D. agents and reveals that he plans to use the Tesseract to enslave the human race. The residual energy of the portal causes an explosion, collapsing the entire facility into a huge pit.

After escaping, Loki has the now mind-controlled Dr. Selvig work on a device which will allow the Tesseract to open a portal through which the Chitauri will invade Earth.

As instructed by Agent Coulson, Natasha Romanoff recruits Bruce Banner to trace the Tesseract through its emission of low-level gamma radiation that only he would be able to trace. Coulson visits Tony Stark, leaving material which convinces Stark to join the team.

Selvig sets up the Tesseract-powered device atop Stark Tower, opening the portal over New York City for the Chitauri fleet. Later Natasha Romanoff is told by Dr. Selvig, now free from Loki's mind control, that Loki's scepter can close the portal because "she (the Tesseract) can't defend against herself."

The World Security Council override Nick Fury and order a nuclear missile launched on Manhattan, but Iron Man intercepts it and guides it through the portal to destroy the Chitauri base, just as Natasha Romanoff deactivates the portal. Iron Man falls through the portal back to Earth just as it closes.

Thor takes the Tesseract  and Loki back to Asgard. Though his superiors are angry at this turn of events, Nick Fury defends his decision to allow Thor to take the Tesseract, saying that humanity is simply not at a level where it deserves the cube's power. At the same time, it is strongly suggested that Thor and Loki would not have been able to leave Earth unless the Tesseract was used to do so.

Thanos is searching for the Tesseract and Loki tells him he can find it.

A device called the Plasma Particle Beam was found that was powered by Tesseract technology.

After recovering the Aether, Sif, and Volstagg took it to the Collector and told him the Tesseract was in Asgard and it is "unwise to keep two Infinity Stones so close together".

The Plasma Particle Beam was used by Phil Coulson to kill John Garrett.

As Hela was walking in Odin's Vault, she pointed out the Tesseract was "not bad", making it the only object in the vault that impressed Hela. When Loki went into Odin's Trophy Room to retrieve the head of Surtur, he passed by the Tesseract and took it from the vault.

Thanos and the Black Order attacked the Asgardian refuge ship where they located the Tesseract. Thanos tortures Thor's head with the Power Stone in order to make Loki to give him the Tesseract. Loki acceded to Thanos' demands, though he managed to give enough time for the Hulk to ambush the Mad Titan, but Hulk was swiftly defeated and Thor was firmly restrained. Afterwards, Ebony Maw retrieved the Tesseract and presented it to Thanos, who effortlessly crushed the Tesseract in his hand and placed the Space Stone in the Infinity Gauntlet.

In order to get the Tesseract and return to their own time, Tony and Rogers traveled back in time to a military base in 1970 where they knew both the Tesseract and more Pym Particles would be. Tony was able to steal the Tesseract without incident, but ran into his father in the process.

After Thanos' defeat, the Tesseract was returned by Steve to its original time.

The Tesseract is one of the most powerful artifacts in the universe. According to Fury, it holds great power that is almost unlimited; Black Widow tells Bruce Banner it has the power to wipe out the entire planet.

The Tesseract can open rifts through space. This is how Loki transported himself and later, the Chitauri, to Earth through portals. Thor and a muzzled Loki use the Tesseract to teleport back to Asgard. In an altered timeline, Loki used this to escape following the Battle of New York after the Tesseract landed at his feet due to a mishap with the Hulk.

It can be used to power other weapons. HYDRA's Tesseract-powered weapons were particularly devastating, as a single shot could completely disintegrate an opponent. Loki's Chitauri scepter also apparently runs on the power of the Tesseract, as implied by Selvig's statement that "she (the Tesseract) can't protect against herself (the scepter)" and Steve Rogers's statement that "it works an awful lot like a HYDRA weapon".

Besides its use as a weapon, the device can harness and channel a seemingly unimaginable amount of field quanta to protect itself from being attacked by other energy sources, as seen when the field region, surrounding the tesseract, proved to be completely impervious to Iron Man's repulsor beams. This prompted Jarvis to state that the cube's barrier is "pure energy", confirmed in one way or another by Loki and Thor on later occasion.

The Tesseract can also show visions of the future, which may or may not come true. The people who have seen this power are the Red Skull, Eric Selvig, and Hawkeye, when the latter two were under the control of the Chitauri scepter.

It cannot be held by mortal hands. Anyone who does so will be disintegrated, their remains sent to another world, as evidenced with what happened to Red Skull.  Fury very briefly touched it to move it with gloved hands, and had to drop it very quickly. When Red Skull touched it, he was apparently disintegrated and sucked through a wormhole towards Yggdrasil. Though he was believed dead, Red Skull was instead transported to Vormir where he was to cursed to become the keeper of the Soul Stone.

The Tesseract houses one of six Infinity Stones, the Space Stone. 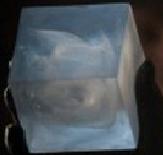 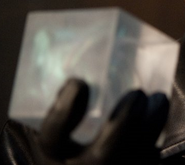 The cube in the custody of HYDRA.

The Red Skull tries to wield the power of the Cube.

The cube in the hand of The Red Skull.

The cube begins to activate in the palm of The Red Skull.

The hypercube as seen in Iron Man 2.

Stark reviewing a holographic data summary of the cosmic cube.

Thor using the tesseract to transport Loki to Asgard.