"As far as I'm concerned, that man's whole body is property of the U.S. army."
―Thaddeus Ross[src]

Thaddeus E. "Thunderbolt" Ross is a retired lieutenant general of the U.S. Army and was the military leader responsible for getting Bruce Banner involved in the experiment which led to the accident that turned him into the Hulk. He is now the U.S. Secretary of State and works closely with the Sokovia Accords.

Ross was among the many who vanished when Thanos completed the Infinity Gauntlet and wiped out half the life in the universe. He was resurrected five years later by Bruce Banner via the Infinity Stones.

The Incredible Hulk: The Big Picture

Sometime after Bruce Banner's accident, Bruce spoke to Ross about the accident and revealed to Ross that he will find a cure, Ross refuses to allow him to get a cure, but Bruce disobeys him and runs away. Ross orders his men to capture Bruce.

With Tony Stark getting worse, Senator Stern called Ross. When Ross arrived in Stern's office, he told him to forgive him as he was in a bit of a hurry as this was taking him away from the Gamma Project and he wanted to get back to it. Ross said that the US army couldn't afford to wait Tony Stark to smarten up. He told both Stern and James Rhodes to follow him. Ross was about to show them something that was classified top secret, Stern asked where Justin Hammer was and Ross told him that Hammer was on the way, Ross told them that their new weapon would be the right way to send the right message to the enemies of freedom, the message being that they don't need Tony Stark. When Hammer arrived he presented to Rhodes and Ross the Aerodymamic Marvel, which he considered to be the next step on close-quarter combat with full protection and attack capabilities.

When testing the machine it was shot down and fell into an enemy zone. Ross was informed that Iron Man was heading in to clean up. Ross was interested in seeing what Stark could do. After Stark saved the pilot, Ross ordered him to land on Cairo Weat Air Base immediately. Stark met with Ross and asked if he had something to ask him, Ross told him that they picked up on a shoot out with the Congolese Army and Stark didn't return fire, stating that when someone fires on an American, that American has to fire back, he also told him that by claiming that he won't make any more weapons, he was distancing himself from his father's legacy. Stark warned him that if he heard about another innocent being put in harm's way there would be consequences.

Ross gets an agreement with the scientist Bruce Banner, his daughter's fiance, for working on a government's project to render soldiers immune to Gamma Radiations. The experiment fails and Bruce transforms in to a giant and amazingly strong brute, who flees after injuring Betty. Taken by a sense of guilt and rage, Ross puts his life at the service of a single cause; to hunt down and capture Bruce.

Five years later, Ross manages to track Bruce because of his contaminated blood, found in a bottle of Guaranito. Ross engages one of the best operatives at his disposal, Emil Blonsky, and sends him in the village of Rocinha, near Rio De Janeiro, where the drink is produced. The team fails to capture Bruce, who becomes the Hulk and flees.

When Blonsky comes back and is told how Banner has become the Hulk, he accepts to be injected with an experimental version of the Super Soldier Serum, developed by Ross' researchers. When Leonard Samson, Betty's new boyfriend, warns Ross that Bruce has come back to Virginia, Ross and his forces, super-powered Blonsky included, attacks the Culver University in an attempt to capture Banner. Ross uses all his men and his new weapons created by Stark Industries, but fails once again, and Betty flees with Bruce.

With much of Ross' surprise, Blonsky manages to recover very fast from the wounds suffered in the battle with Banner, that because of the Serum. General Ross manages to track Banner's accomplice and has his lab taken in custody by the Army. Unknown to Ross, anyway, Blonsky goes to Samuel Sterns' lab and forces him to inject him with Bruce's DNA, which reacts with the Serum and transforms him into a Hulk-like monster. For stopping Blonsky, Ross accepts Banner's help, and has The Hulk fight the Abomination. At the end of the battle, Ross takes Blonsky in custody, while Banner is disappeared once again. Later, in a bar, Ross meets Tony Stark, who wants to talk with him about the "Avengers Initiative" that might interest him.

Tony Stark's meeting with Ross was arranged by Phil Coulson and Jasper Sitwell to prevent Ross from releasing Blonsky.

In need of new information about the Hulk's movements, Ross obtained the World Security Council's permission to extract the data from S.H.I.E.L.D.'s computers. A few hours later, Ross was confronted by Nick Fury himself. Ross told Fury that he wasn't going to leave the safety of the world in his hands. Ross then left, claiming that he had "a Hulk to catch".

When Natasha Romanoff recruited Banner to help S.H.I.E.L.D locate the Tesseract, she mentioned that the organization had helped keep other interested parties off of Banner's trail, referring to general Ross.

"The world owes you an unpayable debt. While a great many people see you as a hero, there are some who prefer the word vigilante. People are afraid."
―Gen. Ross[src]

Ross, believing that Black Widow betrayed him and helped Captain America and Winter Soldier escape, asked Councilwoman Hawley to lend her resources to aid him in locating her.

Five years after the Snap, Ross, along with all the other victims of the Decimation, was resurrected by Bruce Banner via the Infinity Stones.

Ross attended Tony's funeral, after Iron Man sacrificed himself to destroy Thanos and his army.

Ross is a proud, loyal, and perhaps obsessive, American soldier, his respect, loyalty and charisma towards his fellow soldiers are fitting traits to a patriot and war hero, however, while these may be his best traits, they are also arguably his worst traits. Believing that his service to the army is for the greater good of his country, his loyalty and attachment lie almost completely to the army, even at the cost of his love for his own family, he has very little respect for weak Americans or any desire to protect their rights and liberties, and something of a hatred of anyone who possesses power greater than the American army, such as the Hulk, he is a loner and tends to keep a distance from everyone, even from his own daughter, Betty Ross, in order to accomplish the best to his duties. He sees the Hulk as a precious resource for the army and considers him and Bruce Banner properties of the U.S. government.

In many ways, Ross is an excellent soldier (but not in a good way) he is a skilled pilot and tactician, a charismatic and capable leader, and a man capable of gaining the respect of every soldier. But on the other hand, if he were to possess even more power and authority beyond his position, were it not for his loyalty to America, there wouldn't be so many differences between him and a true dictator.

Ross is quite hypocritical; evidenced by the fact how he claims that he loves his daughter, Betty dearly, yet he has completely destroyed his relationship with her; due to him hunting down Bruce, the man she loves as a fugitive and the fact that he was the one who made him a fugitive in the first place.

Ross also blames Bruce for injuring Betty, regardless of the fact that he wasn't even in control of his actions at the time when he was the Hulk and instead of helping him cure his gamma radiation, which Ross was partly responsible for in the first place, he instead planned to imprison him forever.

In Captain America: Civil War, Ross is not always without reason to be concerned regarding individuals with near-unlimited power, but his methods of dealing with these said individuals are completely unjustified. Having continuously witnessed the casualties and destruction of several incidents regarding powerful superhumans such as the Battle of Sokovia, events that happened without supervision or jurisdiction from the government which caused the Avengers to run freely, he began viewing the Avengers as loose cannons (despite the fact that he hypocritically tried to create an army of super soldiers) and that the Sokovia Accords which would keep them on constant government watch was best for the world; however, in truth, it was actually an attempt to control the Avengers against their free will, which would later spark a civil war.

Ross is quite arrogant and self-righteous; for example, when he first officially met the Avengers at the New Avengers Facility, he tried to speak down to them as if he was superior to them, however, he was quickly put in his place by Steve Rogers, the leader of the Avengers, who stated that the Avengers may come to a decision that he doesn't like; regarding the Sokovia Accords.

In Avengers: Infinity War, 2 years after the Avengers Civil War, even after Helmut Zemo was revealed to be the true culprit behind the Bombing of the Vienna International Centre, Ross still refers to Steve and his faction of Avengers as criminals and ordered their arrest, thus; earning James Rhodes' (who once respected him) anger that the latter got a court martial when he chose to cut Ross off and disobey the Sokovia Accords during the Infinity War.

Ross is still just as arrogant and self-righteous as ever, as he tried speak down to Steve and his faction of Avengers, but the latter put him in his place yet again; this time Steve probably threatened him, stating that if Ross and the governments get in his way; he will not hesitate to fight him.

Ross in the hospital after the accident.

Ross with his daughter, Betty. 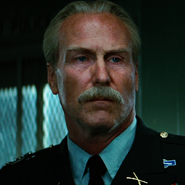 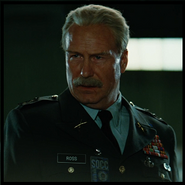 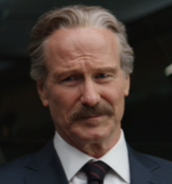 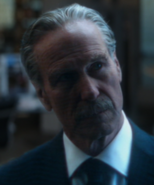