"I thought by eliminating half of life, the other half would thrive. But you've shown me, that's impossible. As long as there are those that remember what was, there will always be those that are unable to accept what can be. They will resist."
―Thanos[src]

Thanos was a galactic warlord Titan sought the Infinity Stones with his followers, the Black Order. Upon discovering the fate of his future self and learning the Avengers' plan to reverse what he had accomplished, Thanos travelled to 2023 and intended to wipe out all life in the universe and start over from scratch. Thanos' plans were ultimately defeated by the Avengers and their allies, and Thanos fell victim to the power of the Infinity Stones himself at the hands of Tony Stark.

While in 2014, Nebula's cybernetic implants connected with those of her past self and allowed the 2014 Thanos to learn of everything that had happened. Thanos captured the future Nebula and sent her 2014 self back in her place.

As Bruce Banner used the Infinity Stones to resurrect everyone killed by Thanos, the 2014 Nebula used the time machine to transport the 2014 Thanos, his ship and his army to the present, sparking a final battle between Thanos, the Guardians of the Galaxy, the Avengers and all of their allies. As the battle raged, Thanos was able to get the Infinity Stones which he intended to use to wipe out all life in the galaxy and then remake it. At the last moment, Tony Stark managed to steal the Infinity Stones back and with a snap of his fingers, disintegrated Thanos and his army, killing the Mad Titan once and for all at the cost of his own life.

Thanos contained many of the traits of the 2018 version as he was the same individual from 2014. However, that Thanos had the benefit of foresight due to the knowledge he gained from Nebula's memories which showed Thanos that he would succeed. However, seeing the Avengers efforts to undo the the 2018 Thanos' Decimation, this Thanos decided to go even further than the original by wiping out all life in the universe so no one would ever remember the way it was before and then rebuild it from scratch using the power of the Infinity Stones.

When defeated and on the verge of death, both Thanos' appeared to accept their fate. The 2018 Thanos didn't resist his decapitation by Thor or the Avengers holding him down when the 2014 Thanos, after looking around at his disintegrating army, simply sank to his knees and awaited his own disintegration. 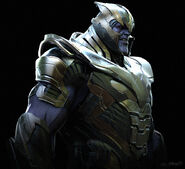 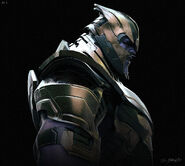 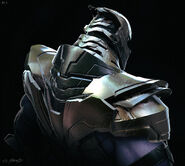 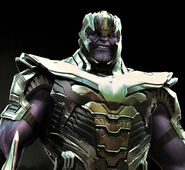 Retrieved from "https://marvel-movies.fandom.com/wiki/Thanos_(Time_Heist_2014)?oldid=276911"
Community content is available under CC-BY-SA unless otherwise noted.