"Marvel Studios’ The Marvels will feature Brie Larson returning to the role of Captain Marvel/Carol Danvers. In the film, she’ll be joined by Teyonah Parris, who was first introduced as adult Monica Rambeau in Marvel Studios’ WandaVision, along with Iman Vellani, who will appear as Ms. Marvel in the upcoming Disney+ series of the same name. Prepare to experience it and fly higher, further, and faster with the film, directed by Nia DaCosta!"

In February 2019, Larson expressed interest for including the character Kamala Khan / Ms. Marvel in a sequel;[1] Feige previously said he had plans to introduce Khan to the MCU following the release of Captain Marvel.[2] The following month, Feige said he had "pretty amazing" ideas for a Captain Marvel sequel.[3] Feige added that a possible sequel could explore the time gap between the end of this film and Danvers' next appearance in Avengers: Endgame.[4] Lashana Lynch expressed interest in reprising her role as Maria Rambeau in such a sequel.[5] Feige confirmed the film is in development at the 2019 San Diego Comic-Con.[6] 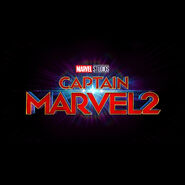