The Avengers
Guardians of the Galaxy

"The Tesseract has awakened. It is on a little world, a human world. They would wield its power, but our ally knows its workings as they never will. He is ready to lead, and our force, our Chitauri, will follow. A world will be his, the universe yours. And the humans, what can they do but burn?"
―The Other[src]

The Other was a servant of Thanos who provided Loki with the Chitauri and scepter.

Frigga, the adoptive mother of Loki, observed the meeting between Loki, Thanos and The Other.

The Other serves Thanos, who is helping Loki Laufeyson. When Loki has arrived on Earth, Thanos is contacted by him, and the Other threatens the God of Mischief, declaring that if he fails in defeating the Earthlings, Thanos will make him know a new kind of suffering.

When eventually Loki is defeated, the Other complains to Thanos that the Earth's inhabitants are not as weak as they were supposed to be, he declares that challenging the Earth's heroes would be to court Death. To this, Thanos simply smiles.

When Gamora betrayed Ronan and Thanos, the Other summoned Ronan and Nebula to Thanos' domain to discuss the betrayal. Ronan got into a heated argument with the Other and used the power of the Universal Weapon to snap the Other's neck, killing him instantly.

The Other talking to Loki.

The Other threatens Loki. 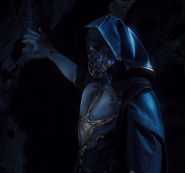 The Other kneels before Thanos' Throne.

The Other bowing to Thanos.

Concept art for The Other.

Behind the Scene image of The Other and Loki

The Other speaking with Ronan

Ronan using the Universal Weapon on The Other

Ronan looking at The Other as his neck is snapped by the Universal Weapon. (You can see The Other's eye for the first time)