126 mins
The Wolverine is a sequel to X-Men: The Last Stand and the sixth film in the X-Men series which focuses solely on Wolverine and his life after killing Jean Grey where he's summoned in Japan. It is also the first one to be released in 3D.

Some time after the events of X-Men: The Last Stand, Logan has become a recluse after the death of Jean Grey and the disbandment of the X-Men, living in an isolated forest just outside of a small town. He begins experiencing nightmares involving Jean and an event in 1945 Japan, where he saves the life of a young soldier named Yashida after the island is nuked by two planes. One night, he notices a mortally wounded grizzly bear. When Logan encounters the bear, a poison arrow has been shot into its back, and Logan is forced to kill it to put it out of its misery. Logan later encounters one of the hunters responsible for killing the bear in a bar, and stabs him in the hand with the same arrow, only to be attacked by the hunter and other men in a bar. As he is about to attack them, he is stopped by Yukio, a young Japanese woman with the ability to see into the future.

Yukio informs Logan that her employer is dying, and wants to see the Wolverine. She also reveals that her employer is Yashida, the young Japanese man Logan had saved years earlier. Yukio later convinces a reluctant Logan to accompany her to Tokyo by plane, where Logan discovers that Yashida owns a large multi-national company. He and Yukio enter Yashida's hilltop home to discover that he has a number of armed guards due to kidnappings and assassination attempts. There Logan meets Yashida's son Shingen and his granddaughter Mariko, as well as the mutant Viper, who poses as Yashida's oncologist. When Logan is cleaned up, he meets with Yashida, who offers him the chance to become mortal again, in exchange for Logan transferring his healing factor to Yashida, who wishes to live forever. However, Logan turns down the proposal, and Yashida later dies, after Logan awakens from a dream about Jean.

At Yashida's funeral whilst the family pay their respects, Logan catches a glimpse of a tattoo on one of the monks, and identifies him as a member of the Yakuza. He interrupts the ceremony to inform Mariko, only for the monks to reveal themselves as Yakuza members, who kidnap Mariko and shoot Logan, who does not heal from his wounds. Logan chases the members down to save Mariko, accompanied by Harada, a childhood friend and former flame of Mariko. When Logan finds Mariko, he unsuccessfully attempts to convince her that she is still in danger, and follows her onto a bullet train, where he fights off more members of the Yakuza, only to be further injured in the process.

Logan decides to stay under the radar, checking himself and Mariko into a love hotel. There he suffers through another dream involving Jean, and he collapses. Once he is treated by the son of the hotel's owner, Logan and Mariko make it to the Yashida seaside house, where Mariko recounts her childhood with Yukio and Harada, and Logan visits the bunker where he saved Yashida. When escaping from the rain back to the Seaside house, Logan and Mariko have an intimate conversation and later kiss, which leads to them sleeping together. The following morning, Logan wakes up to discover Mariko missing, and chases after her captors, only grabbing one whilst the others escape, and discovers Noburo Mori, the corrupt minister of justice who is to marry Mariko, ordered her kidnapping. He meets up with Yukio, who explains that she had a vision of him lying dead and holding his heart in his hands. He goes to confront Mori, who is flirting and playing with two women, and interrogates him for information on Mariko's whereabouts. Mori reveals that Shingen ordered her kidnapping, and Wolverine throws Mori over the edge of the building, only for him to land incidentally in a swimming pool.

At the Yashida residence, Shingen informs Mariko of how Yashida was to leave everything to Mariko, and attempts to "free" her using his blade. However, Viper and Harada intercept him, and Harada kidnaps Mariko whilst Viper poisons Shingen, and the make their escape. Logan and Yukio enter the residence to find the bodyguards dead, and Logan uses Yashida's pin-bed to discover that viper planted a bug on his heart which caused his healing factor to shut down. Logan cuts into his body to remove the bug, but Shingen intercepts them and fights with Yukio. Logan removes the bug, but supposedly dies on the table. However, he awakens and heals, fighting off an armored Shingen, who stabs him but to no effect. Logan later stabs and kills Shingen.

Logan and Yukio flee to the research facility that Mariko is being held in, but Harada and his men shoot Logan multiple times with their arrows, slowing him down. Viper restrains Logan, and introduces him to the Silver Samurai, a giant robotic Samurai made completely of Adamantium. When the Samurai awakens, it attempts to cut off Logan's claws, but Logan is saved by Mariko and breaks free, fighting the Samurai off. Harada shoots an arrow into Viper, who regenerates her skin and battles Yukio, whilst Harada attempts to redeem himself by fighting the Samurai, only to be slain in the process. Logan continues to fight the Samurai, which cuts off his claws, forcing him to fight the Samurai with the sword. Yukio ties Viper up and hangs her in the air before kicking down, killing her. Logan manages to cut off the Samurai's head, only to fall towards the edge of the research facility, where the Samurai begins to drill into his broken claws. The Samurai reveals itself to be Yashida, who also notifies Logan that the suit keeps him alive. Yashida's age begins to reverse as he claims Logan's healing factor, but Mariko gains the upper hand by throwing the broken off claws at Yashida, giving Logan enough time to disassemble the suit and throw it out of the building, killing Yashida and allowing Logan to regain his healing, also growing his broken claws back in the process, although not made of Adamantium. Logan begins to slip away and encounters Jean, informing her that he killed her because she hurt good people, and he returns to normal.

At the landing strip, Yukio, Logan and Mariko share an emotional farewell, and Mariko begs Logan to stay, although he politely refuses. Yukio becomes Logan's self-proclaimed bodyguard, and asks him where he wants to choose his next destination, to which Logan replies that he'll see.

In a post-credits scene, the film jumps to two years ahead. Instead of going through the scanner, Logan chooses to be patted down, and he notices a small screen which advertises an invention known as the Sentinels created by Trask Industries. Logan also notices several loose pieces of metal in a basket shaking, as well as the scanner. He extends his claws and turns around, meeting Magneto, who explains to Logan that something is wrong, although Logan does not believe him. Magneto agrees and everyone around them freezes, in which Professor Xavier reveals himself, although Logan does not understand how it was possible as Xavier was killed by the Phoenix. Xavier then tells Logan that he is not the only one with gifts.

Continuity and References to Earth-10005

The film was shot in Australia and Japan.

Behind the scenes shot.

Wolverine in the snow.

Hugh Jackman on the set.

The "Wolverine vs. Samurai" set.

Jackman on the Japanese set.

Jackman and Fukushima on set.

Rila Fukushima on set as Yukio.

Yukio and Logan on The Wolverine set.

Svetlana Khodchenkova on set as Viper.

The Silver Samurai's armor on set. 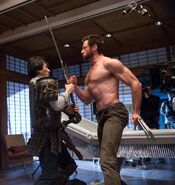 Wolverine in a pit.

Wolverine fighting some ninjas on the set.

Behind the scenes picture 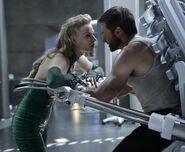 Mariko and Wolverine in Casino. 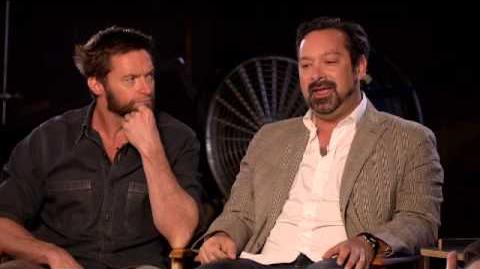 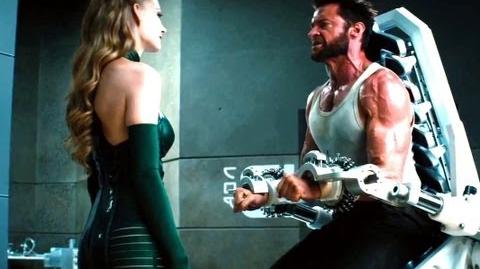 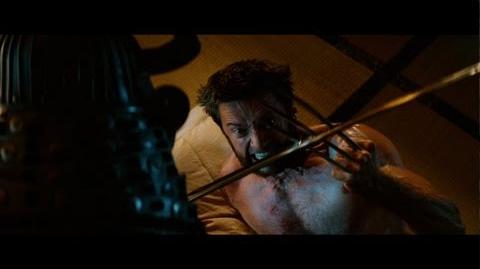