Marvel Movies
Register
Don't have an account?
Sign In
in: Captain America (1990) characters, Presidents of the United States

Ronny Cox
Thomas Kimball is the president of the United States.

As a child, in 1943, Thomas Kimball sneaks out of his room by night to take a photo to the White House; the kid arrives at the place just in time to see a man who forces a missile directed at the White House to change course and land somewhere in Alaska, thus saving the country. The kid takes a photo of the hero, and tells the story only to Sam Kolawetz, his best friend. The two decide to have the mysterious hero as an inspiration.

In the following years, Kimball goes on to become an honest politician and a Vietnam War hero until being elected the President of the United States of America after George H.W. Bush. In 1993, a year into his term, he is pushing for pro-environmentalist legislation that is angering the military-industrial complex, who hold a secret conference in Italy that is led by the Red Skull. Since Red Skull doesn't want to create another martyr, he decides to have the President kidnapped for transplanting his own brain in his body, so to become the new President.

After being warned by Kolawetz of Captain America's return, Kimball is captured in Rome, thanks to one of his generals who's been corrupted by the Skull, and taken to Forte Lorenzo, the criminal's secret base in Italy. After the first visit for preparing his brain to transplantation, Kimball manages to steal a bottle of acid, and uses it to melt the lock of his cell. Evaded, Kimball is soon reached by the Red Skull and his men, but once he realizes that they want him alive in order to control him, he heroically throws himself off the parapet, just to be saved by Captain America, who was climbing the wall. The two of them teams up, and Kimball tells the hero that he was his inspiration. The President then picks up a machine gun and joins his hero in a battle against the Skull's henchmen. When Cap tells him to flee, Kimball refuses, saying that he'd never abandon Captain America. The two of them alone defeat the whole Red Skull's army, and arrive at a final confrontation with the Skull himself. While Kimball knocks out his corrupted general and a particularly strong henchman, Captain America defeats the Skull once-and-for all.

With the Skull's menace ended, Kimball comes back to Rome and begins his pro-environmentalist politics, leaving after it a message for Captain America, praying him to come back whenever there's need of him.

Tom is a honest man, whose love for his country and thirst for justice has not been corrupted by entering the White House. Being the president of world's most powerful country, Tom disposes of an immense power. He is loyal and just, a revolutionary in the field of ecologism, a man who firmly believes in the American Dream. 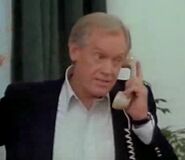 Thomas Kimball as the President of the United States. 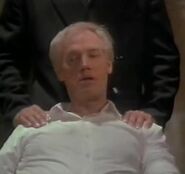 The President teaming up with Captain America.