Gavin Borders
Jett Klyne
Tommy Maximoff was the first born son of Wanda Maximoff and Vision. He is the twin brother of Billy Maximoff.

To her surprise, Wanda then gave birth to a second boy, Billy. They laid the twins down to sleep whilst Vision saw Dr. Nielson out.

Wanda and Vision sat down on the couch to watch television, each holding a twin in their arms.

The twins were restless, crying and screaming all the time even with Wanda trying to control them with her magic. Agnes offered to babysit to get them off to sleep but very soon the twins vanished from the cots. A concerned Wanda looked for her sons only for them to appear behind her coming down the stairs, now five years old.

Tommy and Billy found a dog and brought him in, bathing him in the sink in hopes of being allowed to keep him. Wanda caught them. Vision found them in the kitchen enquiring about the dog. Agnes also dropped by with a kennel and helped the boys come up with the name "Sparky" for the dog. The twins begged their parents to let them keep Sparky but they were told dogs were a big responsibility and they had to be at least ten years old. Tommy and Billy looked at each other and aged five years so that they were ten and could keep the dog.

A disturbance, in the form of a drone, disrupted them and Sparky ran away. Wanda confronted the drone and protected her boys. They went searching for Sparky, calling out for their pet when Agnes approached with a bundled sheet, she said that she found Sparky dead. The boys, upset, looked at each other with the intent of aging up again to deal with the hurt but Wanda convinced them not too and took them home.

At Halloween, Tommy teased his brother, claiming he was dressed as the "cool" twin. He had come to idolise his Uncle Pietro and just wanted to be cool like him. Pietro scared Billy, pretending to be a vampire, chasing the twins with his superspeed. Wanda came downstairs and was disappointed to learn that Vision wasn't going to be joining them for trick or treating. Pietro stepped in and when Wanda pointed out he didn't have a costume, he took Tommy and returned with matching costumes - blue tops with a silver lightning bolt stretched across the chest.

Now that everyone was in costume, Wanda, Pietro, Tommy and Billy went trick or treating. Pietro was a bad influence, using his superspeed with the boys to cause all kinds of mayhem.

Later, Tommy, excited about a house giving out full size bars of candy, runs off at superspeed to the house, returning with the candy. Realising he has superspeed, he speeds around excitedly. Wanda stops him in his tracks and tells him to take his brother. They whiz around the neighborhood getting candy until Billy senses something wrong with Vision. Billy, with powers of his own, stops Tommy in his tracks and tells his mom that something was wrong. Wanda froze the town, blasted Pietro away after he made a snide comment about Vision dying, and expanded the borders of the Hex to save Vision.

Billy and Tommy approached their mom the next morning and told her that their game controllers were acting weird, shifting between the time periods. Agnes came in and offered to take the boys to give Wanda some alone time, which she was all too grateful for. Billy and Tommy went with Agnes to her home and had lunch. Agnes then abducted them and locked them away waiting for Wanda to come looking for them.

Billy and Tommy call out for their mom but are trapped away where Agatha locked them. After Agatha learned what she needed to from Wanda, she returned to Westview and took the boys, at the end of tethers into the streets, choking them.

Wanda attacked Agatha, freeing the twins from her hold and told her sons to go inside which they did.

Billy picks up on Wanda's distress and tells Tommy, they leave the house and rush to aid their mother using Tommy's superspeed. However, Wanda had opened the barriers of the Hex to let the townspeople out and Tommy, Billy and Vision began to disintegrate as they couldn't survive outside of the "WandaVision" reality. Wanda closes the barrier again, restoring her family. They were surrounded by the real Vision, Agatha and S.W.O.R.D. led by Tyler Hayward. The two Visions engaged each other, Wanda went after Agatha and the twins were left to deal with S.W.O.R.D. Billy used mind control to freeze the soldiers whilst Tommy used his superspeed to disarm them all.

Hayward was enraged and raised his gun to the twins, shooting at them. Monica Rambeau intervened, stopping all but one bullet which Billy caught with his telekinesis and discarded. Billy, Tommy, Monica and Vision could do nothing but watch as Wanda and Agatha battled above them until Wanda unleashed the Scarlet Witch and defeated her enemy.

The Maximoff family returned home where Vision and Wanda put the boys to bed. Soon the barrier of the Hex closed in and erased the house, Billy, Tommy and Vision leaving Wanda all alone.

Some time later, Wanda was in self imposed isolation, using astral projection to study the Darkhold, when she heard Tommy and Billy calling out to her. 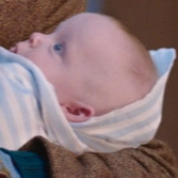 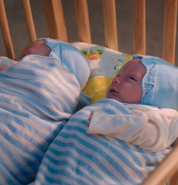 "On a Very Special Episode"