"You will tear them apart. From the inside."
―Ultron to Wanda Maximoff[src]

Ultron was a self-aware, self-teaching, artificial intelligence created and programmed by Tony Stark and Bruce Banner from the Ultron Program and the use of the Chitauri Scepter as part of a peacekeeping force intended to help out the Avengers. Ultron concludes that the only way to ensure peace on Earth is through mankind's immediate extinction.

Tony Stark and Bruce Banner originally devised the idea for Ultron as an extension of the Iron Legion, operating independently as a peacekeeping force. However, neither Banner nor Stark were able to create the level of A.I. necessary to achieve this purpose on a large scale. After the assault on the HYDRA Research Base, and the retrieval of Loki's Scepter, Tony asked Thor if he could study the Scepter for a few days before Thor returned it to Asgard. Upon studying the Scepter, Stark and Banner discovered a net of neurons hidden within the gem inside that could finish the Ultron Program.

At first, Bruce refused to help, stating that they did not know what it would contain, but with a bit of persuasion, he eventually came around. The two eventually configured a suitable AI structure and left J.A.R.V.I.S. to complete the construction. When Ultron awoke, he seemingly destroyed J.A.R.V.I.S.. After the party, Ultron confronted the Avengers and attacked them using the Iron Legion drones. Even though Ultron's body was destroyed, he used the Internet to escape. It was later revealed Ultron had also tried to use the Internet to access to nuclear launch codes, but J.A.R.V.I.S. was discretely preventing him from doing so, having also escaped into the Internet.

Wolfgang von Strucker's abandoned research base in Sokovia was taken over by Ultron, who built himself a new robot body and an army of duplicates. Ultron soon recruited Wanda and Pietro Maximoff to his cause, promising them to help them eliminate the Avengers. Ultron and his new allies acquired Vibranium from Ulysses Klaue. The Avengers tried to stop them, but most of them were "hex" by Wanda. Iron Man tried to stop Ultron, and while he managed to destroy Ultron body, the vibranium was no longer within reach.

In South Korea, Ultron forced doctor Helen Cho to use her expertise with cellular regeneration, and her regeneration cradle, to build himself a powerful synthetic body using vibranium. When Ultron was in the middle of the process of transferring his mind into the new body with the help of the Mind Stone found in the sceptre, Wanda was able to tap into Ultron psyche and discover that he was planning to destroy all of humankind, prompting her to cancel Dr. Cho's mind control. The scientist, released from the mind control, then overrode the transfer, causing Ultron to lash out at her in return.

Unable to complete the transfer expediently, and with the Maximoff twins having abandoned him, Ultron took the android body and fled. With the Avengers bearing down on Ultron's location once again, Ultron attempted to evade them in a trailer along with the regeneration cradle and the dormant android body. Ultron nearly completed in uploading himself into his new body, he was interrupted by Steve Rogers.

The two battle on top the trailer, Steve were able to distract Ultron long enough for Natasha Romanoff to secure the cradle. Ultron's Sentries begin to lift the trailer and flew up into the air while carrying the cradle and Natasha inside. Using the Quinjet, Clint Barton was able to get the cradle from Natasha, only for Ultron to arrive and abduct Romanoff upon which he fled the scene. Sometime later, Natasha awoke inside Ultron's lair that is located underground in Sokovia. Ultron decidedly spared her as he desired a someone that he could speak to after losing the Maximoff twins from his side. Even without his new body, Ultron proceeded with his plan. Ultron used the remaining vibranium to create a upgraded body for himself.

Ultron created a set of machines powered by vibranium capable of raising a portion of the country from the ground, which would later be propelled against the Earth from a distance high enough to cause an extinction-level event. Before taking the fight to Ultron, the Avengers evacuated the airborne portion of Sokovia. The Vision, Ultron's body which had been recovered by the Avengers and had been reconfigured with J.A.R.V.I.S. in the mainframe, confronted Ultron and was able to cut him off from the Internet.

Ultron than gave a speech as his Sentries began to terrorize the Avengers and the citizens of Sokovia, Ultron attacked Thor in the air, having recognized him as a noteworthy obstacle. The two engaged in battle after Ultron threw him down into a church. Though Ultron was able to outmatch Thor, the latter hinted at stalling the fight, after which Vision emerged and hit Ultron away using Mjölnir.

The Avengers were able to protect the control device in the church at the center of the city, which could have led to Sokovia being rammed into the Earth. During the fight, Ultron Prime's body was heavily damaged, and most of the Ultron Sentries were destroyed. At the same time, Nick Fury arrived with the S.H.I.E.L.D. Helicarrier and James Rhodes to evacuate the citizens of Sokovia. Though Ultron attacked the Helicarrier, Rhodes successfully defended it with the help of Stark. As he was losing, Ultron sent many of his sentries away, but they were destroyed by Rhodes, Vision and the Hulk.

Ultron reached the Avengers Quinjet and used its firepower to attack the Hulk before flying off to fired on the other Avengers and civilians. Ultron found one when Hawkeye rushed to rescue a boy, but before the Quinjet's guns could find their target, Pietro shoved the Avenger and boy to safety, sacrificing himself in the process. The Hulk retaliated shortly thereafter, leaping inside the Wuinjet's open hangar and threw Ultron out down to the streets below. Wanda found the wrecked form of Ultron in the wreckage of a bus, and tore out its core in a symbolic gesture to demonstrate how her own heart had been broken by the death of her brother.

One of the remaining Ultron sentries was able to activate the control device, but Iron Man and Thor were able to overcharge it, causing the destruction of the airborne portion of Sokovia before it could reach the ground. The last damaged Ultron sentry, carrying Ultron's mind, managed to crawl out of the rubble. Before he could escape, he was intercepted by Vision, who commented that he's afraid of death. Ultron frustratingly noted that Stark wanted a savior, but settled for a slave, which Vision acknowledges, and commented they were both disappointments. He then noted that humans were strange in their belief that order and chaos are separate things.

Conversely, he also claimed that humans do have their graces, which Vision claimed that Ultron failed to see. Ultron shrugged this off, saying that humanity would inevitably doom itself. Vision agreed, but claimed that something isn't beautiful because it lasts, and that it was a privilege to be amongst them. Ultron sneered and described him as naive. After Vision wittily answered that he was "born yesterday", an angered Ultron lunged at him, only to be destroyed with a energy blast from the Mind Stone.

Ultron's programming was created with emotional responses based on Tony Stark and he possesses a god-complex. He was maniacal and employs the use of dark humor as well as figure of speech. He resents the Avengers and believes them to be foolish for desiring to protect the world but not wanting to change it. Ultron used the Internet to learn about his creators and so gained access to knowledge of the countless atrocities committed by humanity. He equates peace to humanity's non-existence. Ultron hates being compared to Tony Stark even going into a mindless rage when compared to him by Klaue. The irony to all this is that Ultron shares many of the traits from his creator Tony including the wit, ego, sarcasm and the ability to make light of a situation even going as far at one point to directly quoting him without even realizing it.

Ultron's dedication to constant evolution results in Ultron re-designing himself several times over the course of his short "lifetime", including an attempt to give himself a Vibranium synthetic body. It was revealed at the end that Ultron ultimately fears death, and due to believing that humanity will inevitably doom itself, he sought to surpass this by turning himself into an indestructible god-like being that would recreate the Earth. His desire to surpass his own limits and wanting to create a perfect humanoid body is reflected in his fascination over the titular character of "Pinocchio". Though Ultron was borderline psychopathic in his behavior and mannerisms, he is shown as having a sympathetic and lonely side as he was able to relate to the Maximoff twins' hardships as well as finding comfort in being able to simply talk to Natasha Romanoff, sparing her and keeping her captive instead of outright killing her.

Ultron is confronted by Vision

First Official Look at Ultron and his army of Iron Legion. 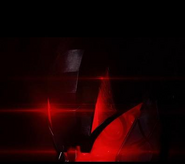 First Look at Ultron in the Title Reveal Teaser

First Look at Ultron in the Title Reveal Teaser

Pre-VFX Ultron on set in Italy

Pre-VFX Ultron on set in Italy 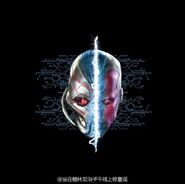 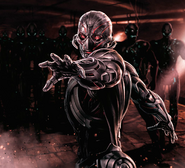 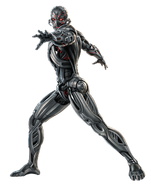 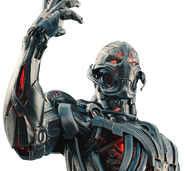 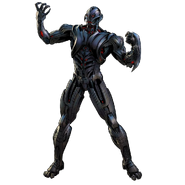 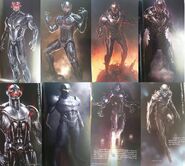 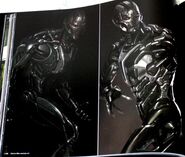 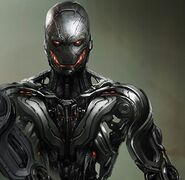 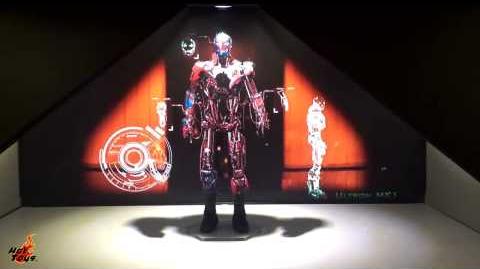 Evolution of Ultron in "Avengers Age of Ultron"