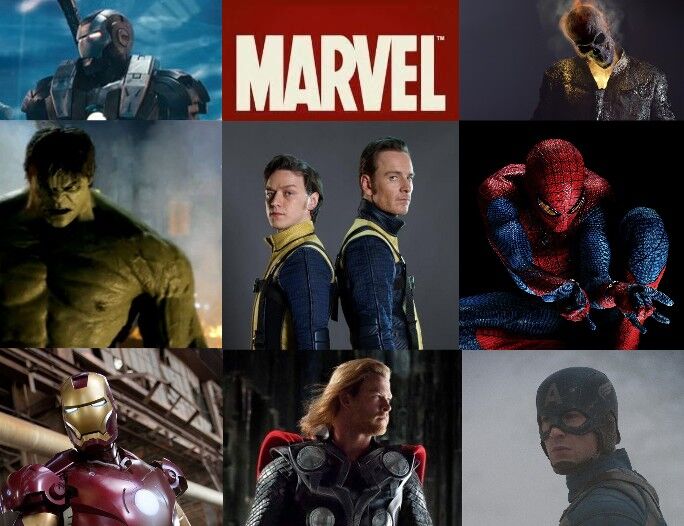 In year of release order:

An amazing trilogy which i have to put down to David S. Goyer who is an amazing scriptwriter. The good guys (especially Blade and Hannibal) were portrayed brillantly as were the villains in all the films. The horror superhero combination works excellently.

I would like to see a fourth film but i doubt it will actually happen. If it does it probably won't include Wesley Snipes which would be a shame.

I like the first film alot. Most portrayals seem pretty faithful to the comic characters. Sabretooth could have been so much better, like he was in X-Men Origins: Wolverine. I think Ray Park's Toad was brilliant. Cyclops could have been used more rather than taking a back seat to Wolverine. But I really like the direction Bryan Singer chose for the film making it more about a fight against discrimination.

The second film is great too, especially Nightcrawler's fight sequence. I also think it develops the story really well but once again Scott is underused.

I like X-Men 3 however they should not have killed/depowered some of the characters that they did. Iceman rocks and should have had a much better fight scene with Pyro although it was still brilliant. A lot of characters weren't really developed but it was still a good film.

Wade Wilson rocked as did the rest of Team X, there were problems with it but oh well I really enjoyed it.

Ok so this obviously isn't the First Class from the comics, however I'm not ashamed to say I think it is a really good film, good cast and crew, a really enjoyable story and even though it is over 2 hours long you don't notice, its that gripping. I think all the abilities were shown really well and I thought the film was generally great!

I enjoy Raimi's Spider-Man series and would have loved to see his story finished. I wasn't particularly happy with each villain being portrayed as a sympathetic character but they're still great films. Peter was also quite whiney and Spidey wasn't witty but maybe we'll get some wit in the reboot.

I was absolutely blown away by this film! Andrew Garfield is far superior than Tobey Maguire as both Spider-Man and Peter Parker, his performance and portrayal of the character was absolutely perfect in my books. Emma Stone was excellent as Gwen Stacy as well and the entire cast fit their roles perfectly; this was a lot more character driven than the previous series and I think that's what made it so enjoyable to watch. I left the cinema wanting much more from this universe and it's a very promising, fresh take on the characters and story that I can't wait to see continue.

Characters I would like to see The Amazing Spider-Man Universe

Not the best film I have ever seen but i still thought it was alright, I think Jennifer Garner is an ok Elektra but there is a lot of room for improvement.

Come on it wasn't bad it was an amazing film! What is Ben Affleck on about "he will return if it is darker"? The first movie was pretty dark! If a sequel is made Michael Clarke Duncan should return, I liked Ben Afflek as Daredevil. Kingpin should then get another superpowered henchman (Bring on Mr. Fear!) as well and maybe get Bullseye his costume!

It was an enjoyable film but not the best adaptation. I didn't like the Hulk dogs, the fact that they made Bruce's dad into a random villain that they made up instead of using one of Hulk's villains from the comics, Eric Bana's portrayal of Bruce was mediocre and Hulk wasn't particularly life-like looking. That aside there were good action sequences and I enjoyed Jennifer Connelly's portrayal of Betty.

I like the Punisher played by Tom Jane but where were the other characters? The Russian had hardly any part and well... died. It was a good movie though.

I thought it was a brilliant portrayal of the Punisher, Ray Stevenson did a brilliant job as for the villains (Jigsaw and Loony Bin Jim) they were brilliant! A sequel would be brilliant especially if Barracuda was the villain like Stevenson suggested.

Ok so they didn't show Galactus as he should appear - Mistake number 1.

They knocked Silver Surfer off his board - Mistake number 2.

But it wasn't terrible, I think they did a good job of portraying Marvel's first family.

It should happen! Bring in the Skrulls and/or Kree! Or any of their other enemies!

Graphically some pieces could have looked better and Blackheart... let's face it does not look like how he was portrayed. The Legion thing should have just been him in full demon form which is the only thing i didn't like about Blackheart. Eva Mendes' character or Roxanne Simpson seemed to me to only be there to act as a love interest which made her seem like an unnecessary character.

My initial optimism for this movie being grittier and darker and well... good... was destroyed after the first few minutes of watching the film. They tried to cram too much action in where story and character development should have been (and was severely needed), the style of filmmaking looked very unprofessional and of the quality of films released decades before this one. I realise this is the directors' style but it was not to my liking. The few positive things... I liked Ghost Rider's design... Idris Elba is a bloody good actor... Danny and Nadya were a good addition... Blackout's look was pretty good. Negative things: Nicolas Cage's performance was awful at the best of times, both as Johnny and as Ghost Rider. Blackout was terribly written (as were most of the characters). The style of the film while fairly unique looked amateurish and dull. The animated sequences were nothing special, I've seen much, much better. Too much action (See my previous comment regarding this). It seems like Sony have no idea what they're doing with Ghost Rider so this is one property I do think needs to go back to Marvel.

My rankings of the MCU films:

I think it was a brilliant way to introduce the character, the end battle was too short but was still really good.

I thought it was AWESOME and the way they're incorporated characters is amazing. Whiplash was awesome although the final battle would have been longer, loved Scarlett Johansson as Black Widow! Sam Rockwell's Justin Hammer was excellent as a rival to Tony!

Not going to lie, I read the spoilers and got annoyed but then I saw the film and I was amazed! It was so awesome and funny and the Iron Legion? Loved seeing all of those armours! I just hope RDJ actually comes back for the Avengers sequel and it makes it interesting to see how they'll make him return.

I really enjoy this take on the Hulk, Edward Norton is a brilliant Bruce Banner and the story that they told was perfect.

If they make a sequel (which i hope they do) I think the Leader would be amazing to see on the big screen. And Doc Samson as well! You CANNOT set up characters like that and not make a sequel it would be amazing! I was rather disappointed by the annoucement that Edward Norton would be replaced. I hope this doesn't mean they'll recast the entire universe they already established because to be quite honest it would ruin continuity even more which would defeat the point of setting up the Marvel Cinematic Universe!

I think all the casting in this film was perfect and even though the Hawkeye cameo was very minor it was great! The designs of the armor, Asgard and the Frost Giants were brilliant and there are some great action sequences.

I was very impressed with this film, it surpassed the first in many ways in my opinion.

Chris Evans completely won me over as Steve Rogers, I thought he played the part perfectly, as did the entire cast! Red Skull's look and Weaving's performance were both spot on and I see a lot of potential. There were flaws with the story and the CGI skinny Steve bothered me, but not to an extent that it ruined my enjoyment of the film.

A sequel would be great, I do feel it would have to be in modern day rather than trying to include it in between the beginning and end of the first film. Also maybe they could reveal that Bucky didn't die from his fall and do a Winter Soldier spin-off, with Sebastian Stan of course, who was excellent in the role!

I really enjoyed it, the pacing was good, the action was amazing (especially as it has been lackluster in some of the solo films) and it was funny. I think they did a brilliant job bringing the team together.

I really enjoy both of the Ultimate Avenger films. I'm not sure why they created the Chitauri instead of using the Skrulls and I don't think Giant Man needed to die, although there has to be some losses on both sides in a battle. I really hope they make an Ultimate Avengers 3 because they are really enjoyable films. If the live action Avengers is even half as good as either of these films it will be great!