This article is for Wanda Maximoff's husband, created with Chaos Magic. For the synthezoid created by Ultron, see Vision.

Paul Bettany
Vision was a construct created by a grieving Wanda Maximoff using her Chaos Magic. He is based on Vision.

Wanda Maximoff drove to the lot of the property she had bought with Vision, 2800 Sherwood Drive in Westview, New Jersey. Grief overcame her and she unintentionally unleashed her Chaos Magic and created an idyllic sit-com style reality and home. Within the home she also created her lost love, Vision, who greeted her warmly with a smile. 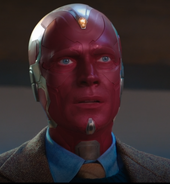 Vision Throughout the MCU + New Looks from WandaVision!