The original War Machine armor, James Rhodes stole the Mark II Iron Man armor after Anthony Stark began to get out of control due to the palladium poisoning in his bloodstream. Taking it back to the government, the armor was given a black and silver paint job and fitted out with a number of weapons provided by Justin Hammer. 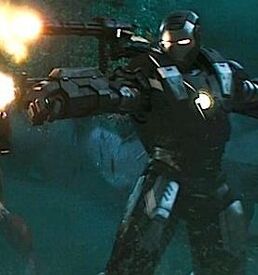 War Machine was developed when the military had taken in the Mark II armor and it was upgraded with heavier external armor plating and new technology. The armor's heavy weapons arsenal of ballistic weaponry was provided by defense contractor Justin Hammer of Stark Industries' rival company Hammer Industries. The markings on the War Machine armor include its serial & production number of "AF47 001", the "ED 445 FLTS" tail code designation of the 445th Flight Test Squadron, and the modern and heritage United States Air Force logos. It is equipped with non-weapons grade repulsor based flight stabilizers that theoretically reach speeds of Mach 8 similar to the Mark IV's flight stabilizers.

Chest battery is capable of generating at least eight gigajoules of energy; only a fraction of this energy is required to power the Mark II exoskeletal structure. Hull Pressure Transducers are onboard sensors that track external pressure based on altitude, speed, and temprature, and adjust imternal settings appropriately. On the right shoulder, there is an M134 7.62mm minigun that can extend or retract in or out of its "cup". On the left shoulder, there is a bunker buster Sidewinder missile. Each wrist supports twin 9mm Claridge Hi-Tec semi-automatic pistols. The 5.56x45mm FN F2000 was ideal for mounting inside of the gauntlets due to the unique way it discharges spent casings out the front. Custom feeds send the rounds directly into the gun, eliminating the standard 30-round magazine.