After the death of his father, Ivan Vanko immediately began work on a replica of the arc reactor created by Tony Stark, and also created electrical whips powered by it. After finishing it, he later traveled to Monte Carlo. During the race known as the Circuit de Monaco, Vanko disguised himself as a worker named B. Turganev. While the other mechanics moved away from the road, Vanko approached it, and did not show fear as racecars sped past him. He slowly walked forward and activated his whips, which destroyed his shirt, revealing the crudely made armor Vanko created. After destroying Stark's vehicle, he discovered he was not in the vehicle at the time, and was met with a hit from behind by Tony, who used a metal plate. Vanko retaliated by trying to eliminate Stark, but instead ignited a car near him with his electricity, temporarily distracting him. Suddenly, Stark's bodyguard Happy Hogan rammed into him several times with his car, and Stark used this time to don his suitcase armor. Stark gently kicked away the car, and briefly grappled with Vanko, whom he defeated by taking out the arc reactor in his chest.

While in employment by Justin Hammer, Vanko secretly began work on a new, more advanced version of his Whiplash armor. Simultaneously, he was at work creating armored robot drones for Hammer, which disappointed the businessman, as he wanted suits. He attached the drones' communications signals to his computer, where he manned all his drones at once, including James Rhodes, who was in the War Machine armor. This attempt to murder Stark failed, and Vanko fled his room to don his second Whiplash armor.

Vanko surprised Stark and Rhodes by attacking them where the duo defeated his remaining drones. Vanko easily subdued both of them in a few hits, thanks to his bulkier armor and more powerful whips. However, the two armored heroes combined their repulsor blasts, creating a massive explosion. Vanko, still alive somehow, then stated "You lose," and activated bombs which resided in the drones and his own Whiplash armor. Stark and Rhodes managed to escape before the explosions killed them, while Vanko himself died.

The Mark I is being analysed by S.H.I.E.L.D. scientists in their Headquarters.

Vanko showing the powered whips used by the armor. 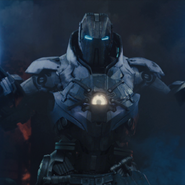 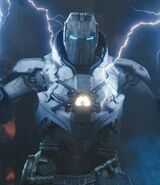 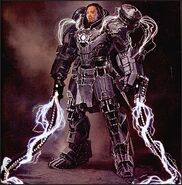