"It's not a world of spies anymore. Not even a world of heroes. This is the Age of Miracles, doctor. There is nothing more horrifying ... than a miracle."
―Baron von Strucker about the "Age of Miracles".[src]

As one of the high-ranking members of HYDRA, Strucker was charged with various science projects, including advanced weaponry. After the Battle of New York, Strucker desired the Chitauri Scepter, which S.H.I.E.L.D. acquired, and began to study it in the S.H.I.E.L.D. S.T.A.T.I.O.N. facility. After a HYDRA mole inside that facility informed Strucker that one of the scientists working on the Chitauri Scepter, Mark Smith, was a potential HYDRA recruit, Strucker decided to recruit Smith personally. Following the successful recruitment of Smith into HYDRA, Strucker ordered him and another HYDRA mole to retrieve the Scepter. Smith and his HYDRA colleague retrieved the Scepter and transported it to Strucker's secret facility in Sokovia. Strucker's scientists began to power weapons using the Scepter. Although Dr. List considered the weapon's results to be remarkable, they were not to Strucker's satisfaction; he ordered List to recruit human volunteers among the rioters of Sokovia to get the results he desired. Many of the volunteers died in the experiments; the twins Pietro and Wanda Maximoff gained extraordinary powers as a result of the experiments.

Strucker was discussing recent events with Dr. List in an underground lab. He states that even though some of their agents have been lost, they have many other followers around the world. He was experimenting with secret weapons, including the Chitauri Scepter. Baron Strucker guided the doctor to "the twins" and observed that it "is the age of miracles..."

Grant Ward mentions Von Strucker being in Europe while speaking with Sunil Bakshi.

Strucker and Dr. List are both mentioned by Phil Coulson as two indivuals who are interested in people with power.

When his base in Sokovia was attacked by the Avengers, von Strucker ignored Doctor List's advice to employ Wanda and Pietro Maximoff against them, claiming that they were not ready yet, and entrusting everything to his own men empowered with Chitauri technology. When Iron Man managed to shut down the castle's force field, von Strucker personally faced Captain America, admitting his defeat: despite his orders, the Twins intervened in the fight, and Cap, believing it to be a trap, knocked Baron Strucker out. At the end of the battle, Strucker and his men were taken prisoner by NATO.

While in his cell, von Strucker was visited by Ultron, who killed him and painted the walls of his cell with the word "Peace" with his own blood to send a message to the Avengers.

Wolfgang von Strucker was confirmed to be dead after being found in his cell after a supposed raid of the Eastern European Detention Facility where he was being held. 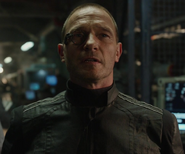 Retrieved from "https://marvel-movies.fandom.com/wiki/Wolfgang_von_Strucker?oldid=269853"
Community content is available under CC-BY-SA unless otherwise noted.