When Nick Fury and his men searched for Steve Rogers on Greenland, the Council ordered them to shut down the operation and return to New York City. Twelve hours later, the Council ordered Fury to stop wasting time on "wasteful programs" and focus on reigniting the Tesseract, naming that operation "Project P.E.G.A.S.U.S.". Despite the direct order, Fury decided to continue with his usual activities. A week later, Fury gave them his report about how S.H.I.E.L.D. saved Tony Stark's life, made an alliance with Thor, and captured The Destroyer. Finally satisfied with Fury's work, the Council decided to increase the funding for the agency, expand jurisdictions for S.H.I.E.L.D.'s agents, and augment Fury's strategic authority.

The Councill requests that Emil Blonsky, the Abomination; be recruited into the Avengers Initiative. Seeing him as a "war hero", they blame his fight in New York City with Bruce Banner on Banner himself; and order S.H.I.E.L.D. to send an agent to ask General Thaddeus "Thunderbolt" Ross to release Blonsky into their custody. Phil Coulson and Jasper Sitwell decide to send a patsy to sabotage the meeting, so Ross will refuse to release Blonsky. At Sitwell's urging, Coulson reluctantly sends the consultant: Tony Stark. As partially depicted in the post-credits scene of The Incredible Hulk, a disgraced Ross sits drinking in a bar, when he is approached by Stark, who ends up annoying Ross so much that Ross tries to have him removed from the bar. In reply, Stark buys the bar, and schedules it for demolition. The next day at the restaurant, Sitwell arrives to meet Coulson. Coulson informs him that their plan worked, and that Blonsky will remain in prison; as Ross has denied the Council's request.

S.H.I.E.L.D. is controlled by the Council. The Council communicates with S.H.I.E.L.D. director Nick Fury using several large plasma screens, each one displaying one of their faces. They are seen disagreeing with Fury's decisions during the Battle of New York. The World Security Council had at least one override command that they used during the Battle of New York to override Fury's orders and sent two jets to launch a nuclear missile at New York, one as a decoy to distract Fury long enough for the other jet to make it's escape and send the missile off.

The council was having a discussion with Alexander Pierce when Nick Fury tried to talk to him about delaying the launch of the three Insight Helicarriers. After Fury's apparent death, the Council ordered Pierce to put the launching of the Helicarriers back on schedule thinking that Fury was a traitor.

During the day of the launch, the council members arrived at the Triskelion to witness the launch. When Captain America revealed that HYDRA had infiltrated S.H.I.E.L.D., Pierce held the council hostage. Hawley disarmed Pierce and took out the HYDRA guards, revealing herself as the Black Widow in disguise. Widow forced Pierce, together with the recently arrived Fury, to access secret information regarding S.H.I.E.L.D. as well as HYDRA and spread it to the public via the internet. Pierce made one last ditch effort to escape by killing the other council members and escape with the Black Widow as hostage but Fury shot him dead.

The World Security Council are mentioned when Gonzales and Coulson are speaking.

"Many Heads, One Tale"

James Rhodes mentions the World Security Council when speaking on oversight with the Avengers. 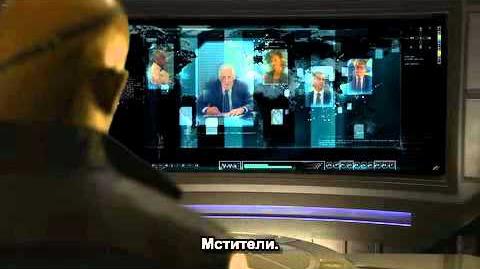