"I may be as pretty as an angel, but I sure as hell ain't one."
―Yondu Udonta[src]

Yondu Udonta was the leader of the Ravagers.

Yondu was sold into slavery as a Kree battle slave by his own parents, when he was young. He had been a battle slave for twenty years by the time Stakar Ogord found and freed him, becoming his mentor. Yondu then became a Ravager.

Yondu and the Ravagers were hired by Peter Quill's father to bring him to him after Quill's mother died, however, instead they captured and raised the boy, constantly threatening to eat him.

Yondu intercepted Star-Lord after the latter retrieved the Orb and evaded Korath's group, instructing him to bring the Orb to the Ravagers, where as Quill planned to sell the artifact on his own. Yondu later pressured a broker into revealing information on the Orb as the Guardians escaped from the Kyln.

Yondu arrived at Knowhere when Ronan the Accuser responded to the call of a drunken Drax. As the two enemies fought, Quill alerted Yondu of his position as he attempted to save Gamora, who had been left for dead in space by Nebula. Aboard the Ravagers' ship, Yondu threatened to kill Quill for double crossing him before coming to his senses after finding out how much the Orb was and teamed up with the Guardians to prevent Ronan's genocidal assault on Xandar.

Later, Yondu lead the assault on the Dark Aster and was quickly shot down, but survived the crash and managed to eliminate an entire squad of Sakaaran troopers using his signature arrow.

After the Guardians made quick work of Ronan, Yondu arrived demanding the Orb, as per the original deal. Later aboard his ship as the Ravagers partied in celebration, Yondu chuckled upon opening the Orb, realizing that Quill switched orbs and finding a troll doll in place of the Infinity Stone.

Yondu and his team of Ravagers were frequenting the Iron Lotus on Contraxia. There Yound spotted his old comrade Stakar Ogord, who has exiled Yondu from his Ravager team for child trafficking. After Stakar left, disgusted with the Iron Lotus for serving Yondu, Ayesha of the Sovereign approached Yondu with a proposition: hunt down the Guardians of the Galaxy who had stolen their Anulax Batteries. Yondu took the job.

Yondu and the Ravagers tracked the Milano to Berhert and tried to ambush the wrecked ship, expecting Star-Lord and the rest of the Guardians to be there. However, Rocket had set up a number of traps and immobilized a large amount of the pirates until Yondu intervened with his Yaka Arrow controlled through his whistling. The Ravagers captured Rocket and Baby Groot, but Yondu decided that they would take the Anulax batteries for themselves and sell them on instead of taking Peter and the Guardians to the Sovereign. This decision angered a number of the Ravagers including Taserface and even Kraglin who was usually very loyal to Yondu. Nebula stepped in and shot the crest on Yondu's head, knocking him out. She aligned herself with the Ravagers as they took Rocket, Groot and Yondu prisoner.

On the Eclector, Taserface and his followers ejected the Ravagers that were still loyal to Yondu into space. When Taserface boasts of his greatness and "fearful" name, Rocket mocked him. Nebula suggested that the Ravagers turn in their captives to the Kree for the bounties on their heads. She also made other demands, including a new hand and a ship. Kraglin showed her to a ship and she took off to track down Gamora.

The Ravagers put Rocket and Yondu in a cell and took Groot for their own entertainment. When Rocket asked Yondu why he kept Peter around, he insisted it was because Peter was small enough to fit in spaces where the others couldn't. They resolved to work together to break out of the cell and enlisted Groot to help them, asking him to get a prototype fin for his head. After many failed attempts, Yondu was given his fin and escaped the cell using his Yaka Arrow, using it to kill every mutinous Ravager except for Kraglin who regretted his actions and helped them out. Yondu, Rocket and Groot made their way to the control room where they took advantage of the display screens to kill any remaining Ravagers.

They met Kraglin on an escape ship and Yondu used his Arrow to blow up the ship. Before being engulfed in the explosion, Taserface managed to notify Ayesha of Yondu's whereabouts. Rocket piloted them through a jump pad to go to Ego's planet, not realizing it was seven hundred jumps away. The sheer intensity of such a large volume of jumps caused their faces to temporarily disfigure as they traveled. When they arrived, Rocket told Yondu that he wanted to save Peter from Ego so he could prove he's better than him, but Yondu knew what Rocket really meant. Rocket rejected Yondu, but Yondu told Rocket about his past, how he was Kree battle slave before Stakar pulled him out and made him a Ravager and realized they were the same.

Yondu, Rocket and Baby Groot met up with the Guardians and fought their way through a fleet of Golden Drones, as well as Ego himself, to reach the core of Ego’s planet where a thick shell protected Ego’s brain. Groot planted a bomb made from the stolen Anulax batteries on Ego’s brain, and most of the Guardians escape while Peter remained to battle his father using his Celestial powers. When the bomb exploded, Ego died and the planet collapsed and Peter lost his Celestial powers. Yondu rescued Peter from the planet's destruction and sacrificed his life in the process.

The Guardians gave Yondu an honorable funeral, during which Peter recognized Yondu as his true father and the Ravagers arrived to pay homage through the Colors of Ogord.

Yondu is the leader of outlaw mercenaries called the Ravagers. Responsible for Peter Quill's kidnapping, a job contracted by Quill's father Ego, Yondu decides to keep the boy and raise him to keep him safe from Ego. Yondu has led the Ravagers for decades, through strength of will, guile, and deadly force. He will eliminate his enemies without remorse. He initially chases after Peter after he took the Orb for himself instead of turning it over to the Ravagers, placing a bounty on Quill's head. However, Yondu shown to cares about Peter saving his and Gamora life. He aid the Guardians in stopping Ronan from destroying Xandar with the promise of claiming the power stone that was hidden inside the Orb. But after Yondu claims the Orb from Peter and departs, he later learns that Peter gave him a fake that holds a Troll doll for his collection, he just laughed about it. Yondu sacrificed his life to save Peter's, telling him just before his death that he is proud that Peter is his "boy".

Yondu uses a yaka arrow as his weapon. It can change its direction, the yaka arrow response to whistle sounds. Yondu's skill at controlling his yaka arrow is enough that he killed dozens of Ronan's warriors in seconds. Aside from commanding a Ravager carrier ship, Yondu's skills as a pilot allow him to effectively pilot armed scout ships into combat.

Yondu on his ship.

Yondu, his second-in command Kraglin, and the Ravagers. 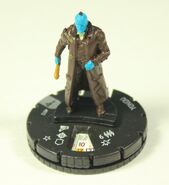 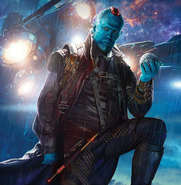 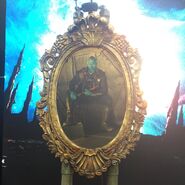 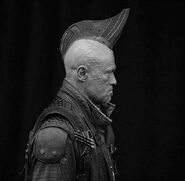